Stones in Pockets brings Indie Classic by the name of “Intercom” 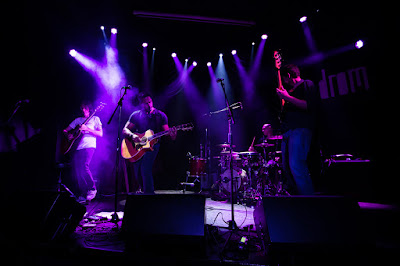 "Stones in Pockets is an alternative rock band from Brooklyn, NY. They describe their style as alternative world music with a core inspire by 90's grunge unplugged.

The band released its album, "Intercom", in July 2019 to drop its unique footprint in the musical clay of alternative rock and a follow-up EP, "Sanctuary", gave birth in October 2019.  The band lays bare before you with these 2 contributions and plays to jumpstart your dormant memories alive again of what made unplugged special to you.

Stones in Pockets recently released their debut album “Intercom” to the masses which draws inspiration from several places. The band would describe their sound as alternative world music with a core rooted in grunge. This description was spot on and apparent as soon as the first song started to play. The lead singer (Neil) has a captivating voice that draws you in from the beginning. However, the band’s instrumentation was the highlight of the song. “DryBox” definitely sets the tone for the album.

“Go Angry” speaks on a man trying to mend a relationship before his lover exits. The lyrics on this song are for sure tearjerkers and relatable. The harmonies on this one are superb! “Canvas” isn’t Neil’s strongest vocal performance but it’s nice to see the band incorporate a more complex vocal arrangement in the album. It’s a well-written track! The chorus & the bridge honestly saved the song.

“Dreams of Kali” sticks to the band’s vision of creating world music as the track is sung in a foreign language. Outside of that, there’s nothing really special about this one. On “Heart-Shaped Box,” Neil received help vocally from Ruah! The duet paid off as this is easily the best song on the album! I can see this one being a crowd favorite at the shows!

While listening to “The Gate,” I noticed that the lyrical theme followed the same concept as “Dreams of Kali” which spoke about a foreign love. Outside of the obvious, this track was also hard to get through. “Supernatural” has very catchy lyrics! The band should be able to play this record anywhere as it truly blends well across genres. “Wicked on the Prowl” was the last song on the album but it didn’t fill the void for what the album was missing! The album needed at least one upbeat track!

Overall, Intercom is a solid debut from the band. The verses are relatable, and the instrumentation is good! Of course, there’s plenty of room for growth but a solid foundation has been set.