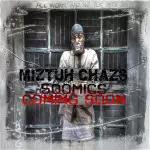 FOR IMMEDIATE RELEASE
Kansas City, Ks — December 18, 2015 — Still buzzing off of a brief European promo tour, Alabama native, Miztuh Chazs releases his 5th studio album "500MICS". It has been 5 years since his critically acclaimed Indie album A.W.O.L. surfaced and now he is back to once again push the boundaries of his craft. The mix of lyrical wordplay and signature AMP instrumentals creates a unique sound that only Miztuh Chazs has mastered. No other project has proven this more than his current project "500MICS" which is set to release mid December.
As a Midwest ambassador, Miztuh Chazs continue to bend the curve of the definition of Hip Hop. With high energy beats, his album gives an exquisite blending of jazz, soul, and rock with a perfect hybrid of 1940’s piano style music, southern Hip Hop rhythm mixed with an amped club vibe and a fresh touch of satire about life. Both an artist, songwriter, beat producer, and entertainer he has spanned various states in the U.S. from California to Tennessee and overseas to Germany and France.
In recent interviews, it was said that Miztuh Chazs is an "Iconic underground artist with amazing business smarts and street savvy" by VirtuallyLoaded.com "Setting The Record Straight". When asked about "500MICS" third single "College Boy Fresh" MusikFace.com says "he continue to bend the curve of the definition of Hip Hop". "Miztuh Chazs has proved that he has made his name in Hip/Hop a permanent stay" says Caleb "C-Harv" Harvey, thacrib.com. With a unique style it was Joshua Glazer, URB Magazine whom took notice that Miztuh Chazs can "maintain the listener’s interest through his clever wordplay and catchy rhetoric".
Even with other projects in the works for Miztuh Chazs, he took a long step back to fully focus on his album. One can almost say he meditated until his resolve became clear. Any listener or fan new and old can find a piece of themselves in this record. Because of this he created an entity that could stand up to most Hip Hop classics that are around today. 500MICS is the pinnacle of underground, indie, and hip hop music.
If you want to experience the rising legend that is "500MICS" go to www.reverbnation.com/mrchazs