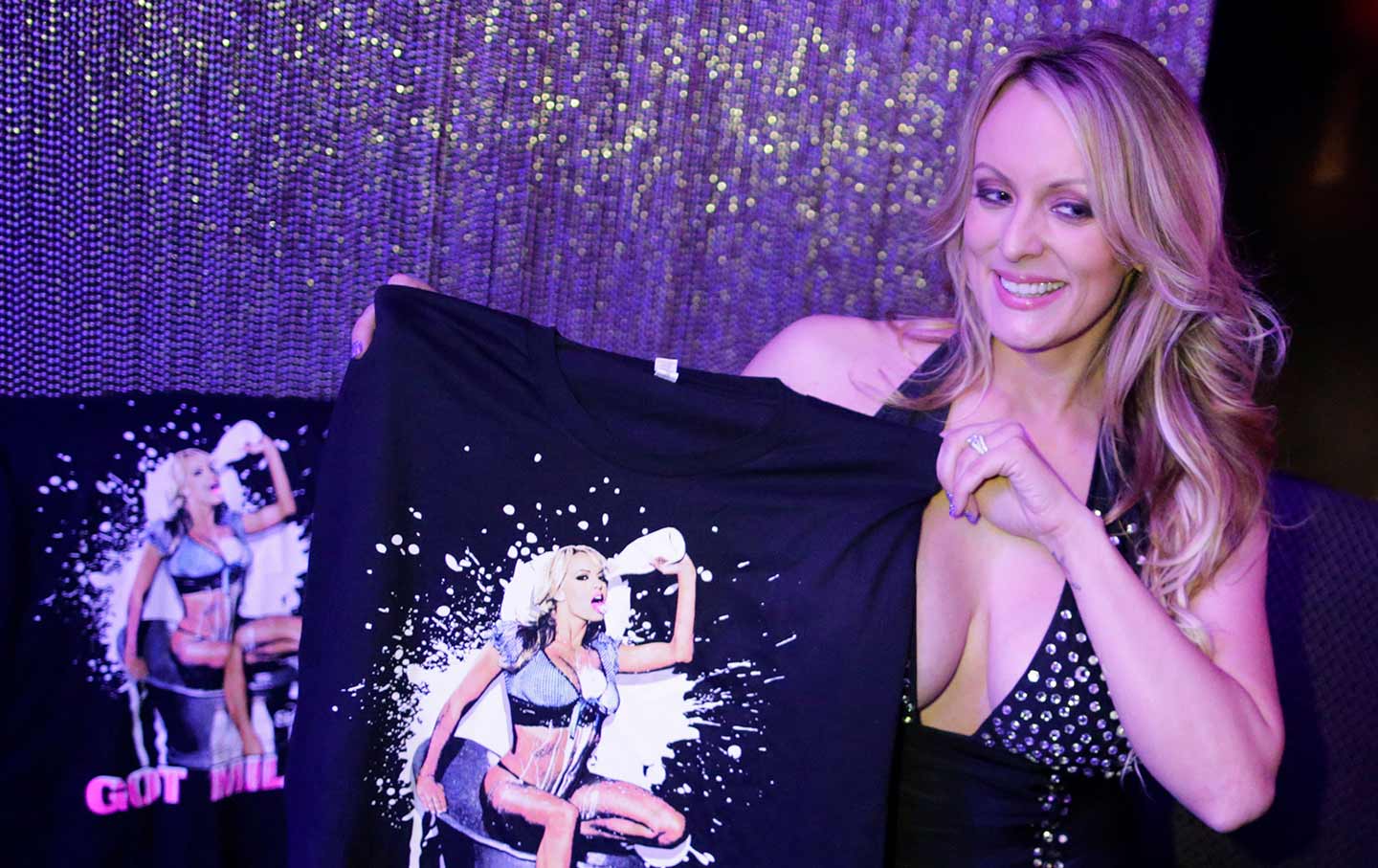 Thank you for signing up. For more from The Nation, check out our latest issue. Subscribe now for as little as $2 a month! Support Progressive Journalism The Nation is reader supported: Chip in $10 or more to help us continue to write about the issues that matter. Fight Back! Sign up for Take Action Now and we'll send you three meaningful actions you can take each week. Travel With The Nation Be the first to hear about Nation Travels destinations, and explore the world with kindred spirits. Sign up for our Wine Club today. Did you know you can support The Nation by drinking wine?

Let's recap the Trump camp's account of the Stormy Daniels story in all its ludicrous glory. They insist that the tryst Daniels, whose real name is Stephanie Clifford, claimed to have had with Trump never happened. It's all a big lie. And despite the fact that it never happened, Michael Cohen, Trump's notoriously combative consigliere (he reportedly told a journalist working on a negative story about his boss, "I'm warning you, tread very fucking lightly, because what I'm going to do to you is going to be fucking disgusting") took out a line of credit on his own home to pay Daniels $130,000 in hush-money.

Margaret Hartmann wrote for New York magazine that, "while there's little evidence that Cohen was kept on the payroll for his sharp legal mind, he'd demonstrated again and again that he possesses the unshakable loyalty that Trump values so highly," and yet Cohen claims that he didn't even tell his boss about this magnanimous gesture, and never planned to do so. He says that he negotiated the agreement and made Trump a party to it without uttering a word about it, and certainly didn't ask to be reimbursed for it. Paying a porn star $130,000 to keep quiet about an affair that never happened was just a personal transaction by a guy who refers to himself as a "pit bull" on behalf of a guy with much deeper pockets than he has. (The White House has consistently dodged the question of whether Trump knew of the payoff.)

Cohen further insists that it had nothing to do with the Trump Organization, despite the fact that he used his company e-mail address to set up the wire transfer to Daniels and, according to CNN, "Jill Martin, a top lawyer at the Trump Organization," is listed in a court filing as the attorney representing the LLC that Cohen established specifically to pay off Daniels. Martin, whose title is vice president and assistant general counsel for the Trump Organization, also issued a statement claiming that she worked on the matter only "in a personal capacity," despite the fact that the address she listed on the filing is that of the Trump National Golf Club in Los Angeles.

All of this, according to the White House and Cohen, also had nothing to do with the presidential campaign—never mind that this all went down just weeks before Election Day, at a time when it appears the campaign was working furiously to kill off stories about the affair that were set to run in at least three outlets. If it had been related to the campaign, Cohen would be liable for an illegal $130,000 campaign contribution, but he insists that it wasn't.

This doesn't appear to be an isolated incident. Karen McDougal, a former Playboy model who has a story that's very similar to Daniels's, was also paid $150,000 to keep quiet by a close friend of Trump's, David Pecker, who runs A.M.I., the National Enquirer's parent company. According to The New York Times, Michael Cohen "was secretly involved in her talks with the tabloid company." The company confirms that, but Cohen says that he doesn't remember anything about the deal.

A small child caught with her hand in a cookie jar could come up with a more credible story than this mishmash of obvious untruths, yet 41 percent of Republicans believe it, according to a recent poll conducted by CNN.

How could so many people believe such a cockamamie tale spun by the most mendacious political figure in modern history? It's not (necessarily) because they're stupid. It's simply an example of motivated reasoning—the human tendency to discount information that conflicts with our deeply held beliefs and embrace that which supports them, no matter how ridiculous it may seem to people who aren't invested in the same belief system. We all do this to a degree.

But it's important to understand the mechanism by which this cognitive process functions. It requires an alternative, ostensibly factual narrative from some seemingly credible individual or institution. There must be an alternative set of "facts" to latch onto in order to dismiss something as obviously false as the story Cohen and Trump's staff are peddling to the American people.

Climate-change denial would not be possible were it not for a handful of "contrarian" researchers arguing that the Earth is actually cooling, or that warming is a result of solar activity. There's an entire cottage industry devoted to writing dubious articles or producing fake—or at least misleading—charts purporting to prove that climate change is a scam.

So it is with Trump's constant laments about "fake news." It may seem silly and immature to those of us who don't support the administration, but it's no laughing matter. A Politico/Morning Consult poll conducted last October found that three out of four Republicans "think the news media invent stories about Trump and his administration, compared with only 11 percent who don't think so." Barrels of ink have been devoted to stories about how Trump's core supporters have stuck with him through thick and thin—about how he really could shoot someone on Fifth Avenue and not lose their loyalty—and Trump's constant laments about fake news is a big reason why that is.

By all accounts, Trump is not a particularly intelligent man, and there's no reason to believe that he has some special understanding of how this dynamic works. The conservative movement has long claimed that sources of information that conflict with its ideological priors—the academy, the media, various government agencies—are all hopelessly biased against the right. Trump's simply turned that up a notch, claiming that it's not just a matter of subconscious bias at work, but rather that negative stories about him are entirely fabricated.

Trump's official and utterly ludicrous account of what transpired with Stormy Daniels is just one example among many of how his supporters convince themselves that he's the guy they voted for in 2016. The pro-Trump media, following his lead, churn out a constant stream of alternative storylines that his fans can hang onto.

It's become common these days to lament "media polarization," as if it's a generic problem that afflicts both sides of the partisan divide. But it's important to note that there's a stark difference in how the left and the right views the mainstream media, and its flaws. Partisan outlets on both sides of the ideological divide see themselves, at least in part, to be watchdogs for the traditional media. But progressives tend to focus on subconscious biases or questionable norms, like the tendency to present both sides' arguments as if there are no objective facts, reporters' hesitation to risk their access to the powerful or their eagerness to conform to the conventional wisdom. When conservatives talk about "media bias," they're often not talking about bias—as a subconscious process—at all.

If you think that professional reporters regularly invent stories out of whole cloth, it may seem defensible to do so yourself in the name of fighting fire with fire. So when a conservative operative tried to pose as a victim of former Alabama Senate candidate Roy Moore in order to dupe The Washington Post into reporting a false charge against him, her cover was blown when reporters uncovered a post she had written in which she gleefully announced that she'd "accepted a job to work in the conservative media movement to combat the lies and deceipt [sic] of the liberal MSM."

There's also a feedback loop between Trump—and Republicans in Congress—and the conservative media. Trump tweets out policy statements based on the nonsense he sees on Fox and Friends, while Attorney General Jeff Sessions names a prosecutor to follow up on House Intelligence Committee Chair Devin Nunes's (R-CA) discredited claims suggesting that Kremlingate is a "deep-state" conspiracy and the real problem is the FBI's supposed bias against Republicans. There's an alternative narrative for every damning story about the regime, even something as straightforward as EPA chief Scott Pruitt's notorious penchant for traveling first class on the taxpayer's dime.

So if you watch Fox and read Breitbart, it's quite likely that you believe the Trump regime has been disciplined and effective and free of scandals, while the mainstream press continues to cover up the greatest political crimes of our generation, all of which revolve around the Clintons or Barack Obama. It's a scam, but one that works to keep those who want to believe it in the fold.