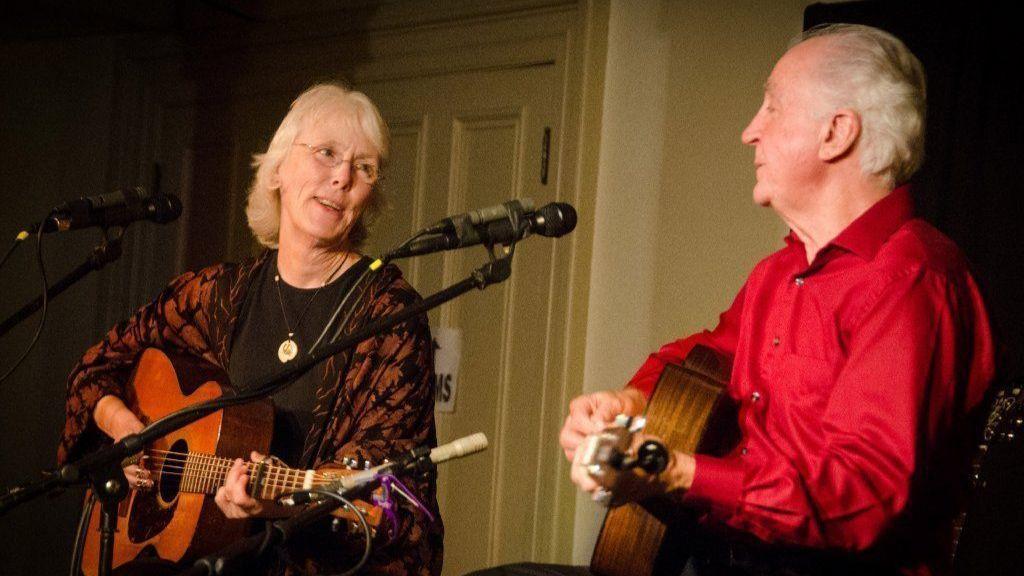 Married duo Cindy Mangsen and Steve Gillette most likely will perform one of their cat tunes when they come to Grayslake April 29. After all, Mangsen has written an album full of feline-related folk songs.
One of them could have the audience laughing and crying at the same time — it's a true story about a cat named Rudy who gets his head stuck in a garbage disposal. (For cat lovers, Rudy survives the ordeal, she said.)
"I like really, really sad songs and I like really funny songs. If people don't laugh and cry at a concert, then why bother?" said Mangsen, who's been performing with Gillette for about 30 years.
The couple who live in Vermont and met at — what else — a musical festival in the late 1980s — have been active folk singers and songwriters for several decades.
What drew Gillette to Mangsen he said was that she "seemed very vivacious and funny."
At the time, Mangsen was a part-time librarian, part-time folk singer and just joining forces with Priscilla Herdman and Anne Hills to create the well-known folk trio Herdman, Hills, Mangsen. Gillette was a full-time folk singer and songwriter with albums produced by such music greats as Graham Nash.
Gillette got one of his big breaks when he co-wrote "Darcy Farrow" with Tom Campbell in the middle 1960s. It's the first song he wrote that got recorded, he said, and at that time he was just starting to get paid to perform at coffee houses. "Darcy Farrow," has since been covered by more than 100 artists, including John Denver.
Gillette said he met Denver in California when the "Take Me Home, Country Roads" legend was just starting to audition and meet people in the folk and country music genre. "It was obvious he was very talented and likable," said Gillette, who wrote the book, "Songwriting and the Creative Process," published by The Sing Out Press.
Gillette's music has been sung by major artists, including Garth Brooks, Waylon Jennings, Anne Murray, Kenny Rogers, Linda Ronstadt, Spanky and Our Gang and Tammy Wynette, among others.
When he and Mangsen married in 1989, they began doing concerts together, each taking turns performing solos with a few occasional duet. Now they do just a few solos, harmonizing most of the time, playing some instrumentals. "I love to sing harmony," Mangsen said.
"Both Cindy and I have an ear for harmony having sung folk music for all these years," Gillette said. "But Cindy has the edge. She had the music theory and education and a great piano teacher."
Between them, they have at least 20 albums, some together, some as duets, and others with Mangsen's trio.
"We both write songs — more so now than ever," Mangsen said. But they're still touring.
"We're going places we like to go," she said, for example, the Chicago area, where she lived until about 1980.
Steve said the Chicago area is "the great ground zero for kind of music we admire."
The Grayslake concert will include older tunes such as "Darcy Farrow," something from the cat album — it's kind of hard to avoid, Mangsen mused — as well as tunes from a Lou and Peter Berryman tribute album they produced. "They're the masters of funny songwriting," Mangsen said.
The couple will also try out some new songs, including one Gillette said he wrote "about the history of the world, past present and future and the opposable thumb."
His newest is a longer version of "The Windows of Heaven," which he wrote with a friend about 25 years ago, and later recorded, he said.
"It came out of a songwriting workshop," Gillette said. "I just thought it was a terrific idea — if we could stand up above and look into people's souls."
Over the years, he said, "it bothered me that I didn't say all I thought I could say in the song," so he rewrote it.
"Just because they're recorded doesn't mean they're finished," Mangsen said. Gillette added, "And it doesn't mean we know them yet, either."
What's kept them centered is their love for folk music. "The thing that drew me to it from the earliest," Gillette said, "is that I saw it as a door opening to a deeper understanding of the truth of the world."
Steve Gillette and Cindy Mangsen: Behind the Song
Time: 7 p.m. April 29
Location: The Grayslake Heritage Center, 164 Hawley St, Grayslake
Tickets: $13-$18
Information: 847-602-8882; www.thelakecountyfolkclub.org
Sheryl DeVore is a freelance reporter for the News-Sun.