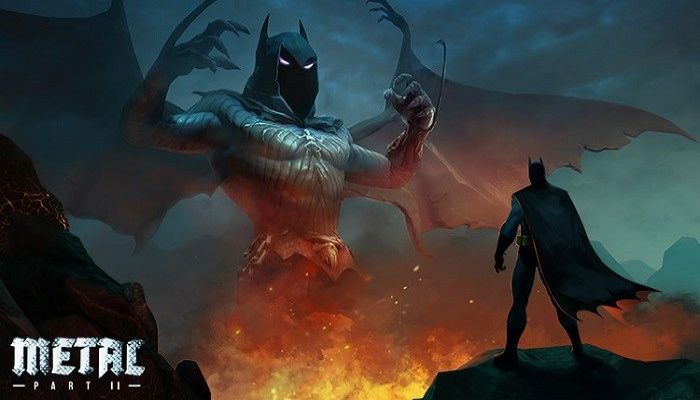 Since the last DC Universe Online (DCUO) column was posted, Daybreak has given us an early Christmas present. The development team dropped Episode 36: Metal Part II (EP36) just a few weeks ago. Metal Part II is the last half of the DCUO content inspired by the Dark Nights: Metal storyline that ran through the DC Comic books in the last half of 2017. We had a chance to fly into the new content on the Switch platform. If you played the prior update, Update 97 which was the Metal Part I content, you'll find there's not too many surprises. Welcome to our newest episode about all things DC Universe Online!
EP36 story begins from the point where Earth is sinking into the Dark Multiverse. Two of the three heroes that make up the DC "Trinity", Batman and Superman, are missing. Meanwhile Hawkman and Hawkgirl's home planet of Thanagar have a world-destroying gun aimed at Earth believing this is the best course of action.
EP36 contains much of the same format, following the footsteps of a typical DCUO "episode formula". Players are treated to new open-world missions on Thanagar, a new 2-player duo, a new alert and two new raids.
In this new content you'll team-up with Hawkgirl, Martian Manhunter, and Batman to battle "Dark Multiverse" alternate versions of Batman. Before you're done, you'll need to defeat iconic Dark Knights: Metal villains like Dawnbreaker, the Drowned, and the Bat God Barbatos, leader of the Dark Knights and the "guy" who started this whole mess.
For a limited time, special "Event" versions of all content in Metal Part II are available to all players level 15 and above! When this episode is no longer a "special event", i.e. when it's considered part of the standard game, it'll be playable by characters level 30 with a minimum Combat Rating (i.e. gear score) of 264.
When you warp to the Hawk planet of Thanagar you'll meet up with Hawkgirl, Martian Manhunter, and Green Lantern T'Larto to take part in daily and weekly missions. 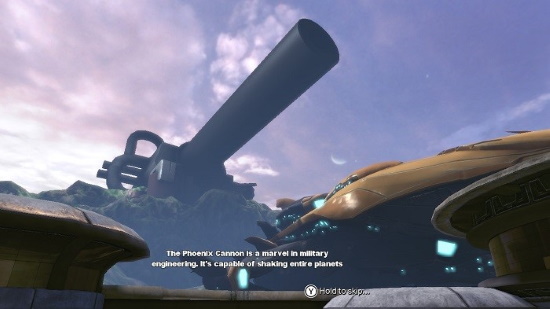 Figure 1 Don't point that thing at me!
Thanagar is a beautiful open city zone, not as large as a Metropolis or Gotham City but spacious. The missions here are standard fare for DCUO, "save X Thanagarians before they become metallized", "collection 15 chained Lantern Rings", etc. Completion awards you the new Thanagarian Marks. 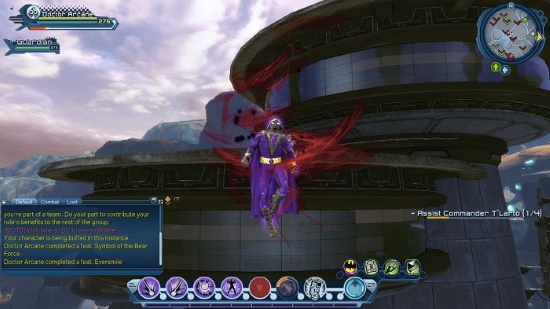 Figure 2 Up, Up and Away... err Maybe Not?
The one odd thing about this zone is that some parts of the city had a ceiling / height restriction (see above). Meaning, I couldn't fly above all buildings. This was an odd thing to encounter when players are used to such vertically spatial zones such as Gotham City. I'm not quite sure if this was a "works as designed", technical limitation or schedule thing. 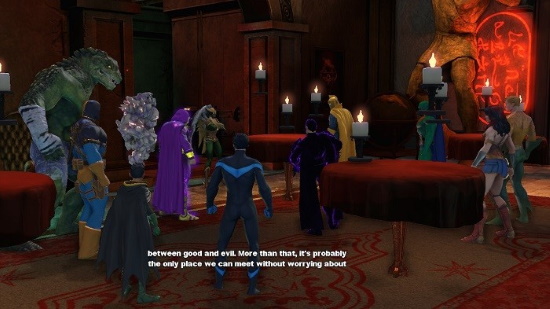 Figure 3 A lot of star power here, good and evil
In the new two-player instance (i.e. duo) players arrive at the familiar Oblivion Bar to meet. Straight out of the comic book story this is one of the few seemingly safe places left after the events of Metal Part I. This is a meeting of the last of Earth's resistance, including you and your partner, to decide how to respond to the Dark Knights and the sinking of our universe into the Dark Multiverse.
This duo takes you on a journey through Batman's nightmares to fight some ghosted versions of Batman's foes, and allies. For the most part it's very well done and was fun to run through initially! 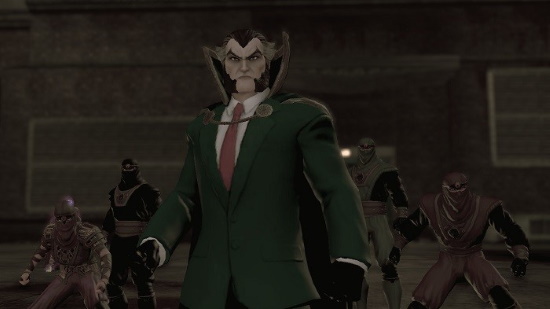 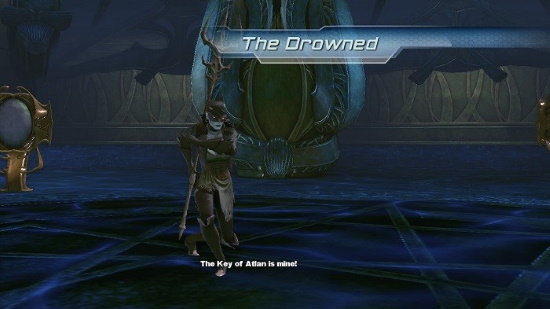 Figure 5 I need some air
This new four-player instance takes you to Atlantis' Silent School, and OA's Sciencells to stop the Dark Knights. Along the way your squad will take on Dawnbreaker who has taken over the Sciencells. You'll face the Drowned in Atlantis where you'll also come across Aquaman who sounds almost like he's voiced by Nathan Fillion. 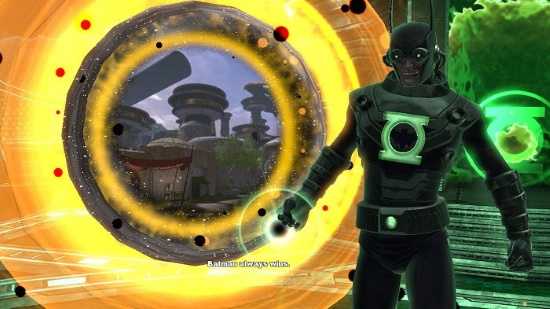 Figure 6 Batman always wins
The story and artwork through this duo were both very satisfying. DC Comic Book lore fans should enjoy it. Throughout the mechanics are straightforward, especially if you pay attention to the audio clues as usual. 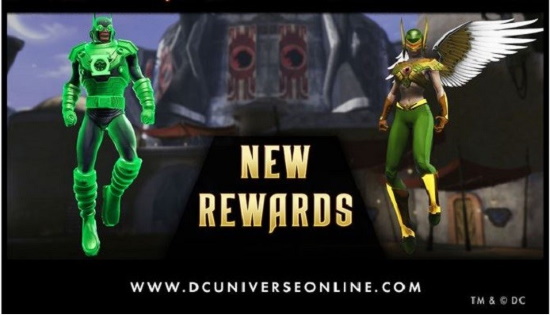 Figure 7 Dress like Dawnbreaker or Hawkman
There are also two new eight player raids, each supporting Normal and Elite mode, that continue the Dark Knights: Metal story.
In "The Phoenix Cannon" you and seven other players will meet Batman, Wonder Woman, and Hawkgirl on Thanagar. The plan is to using the Atlan key along with the Phoenix Cannon to venture into the Dark Multiverse.
"Into The Dark Multiverse" takes your team, along with Batman, Wonder Woman, and Hawkgirl into the Dark Multiverse. The goal is to take the fight to Barbatos as well as find and rescue Superman. This raid even has a cool card game challenge within it! 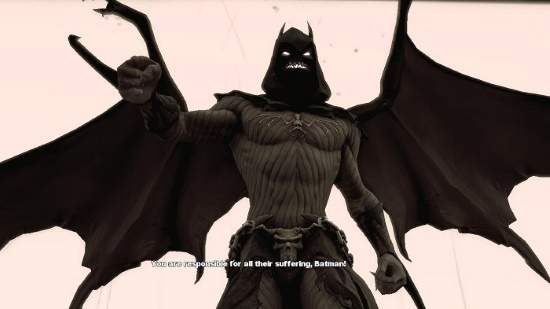 Figure 8 The cause of all our misery
Both raids do take some time to complete but are worth the time for any DC Comics story mongers. The new character models used throughout are nicely detailed with sharp crisp lines. These raids add quite a few feat points to obtain by meeting certain conditions, etc.
As is typical with each episode the developers add more feats, styles and base items to collect.
The avarice Lantern Larfleeze is back! DCUO has its own Christmas event in "Seasons Greedings". Find and recover the stolen gifts in Metropolis and Gotham City before it's too late! The 2019 rendition adds three new feats and you can collect the current winter styles and festive base items. 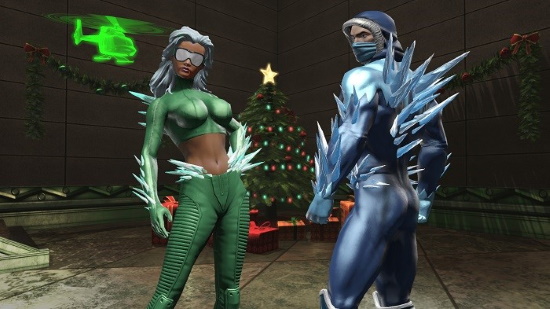 Figure 9 Some nice styles for your Ice Tank perhaps?
EP36 isn't going to convert any non-DCUO players into active players. The episode continues to use a tried and true formula that seems to succeed for its die-hard player base.
This episode's story content is beautiful, and sometimes aged, but nice to play through for the DC lore lovers, at least once. The writers and artists have done justice to the Dark Knights: Metal DC Comics campaign.
Players on some platforms, like the Nintendo Switch, might find the queue times a bit lengthy. Unfortunately, the Nintendo Switch player base has seemed to dwindle. This is concerning to someone who has 7 months left on his subscription, DOH! Maybe a cross-play solution is in the cards for the future? Dauntless has done it, why not anyone else?
Nevertheless, with EP36 DCUO continues to be the superhero game for people who love DC Comics lore or for those who like to keep hunting for that "perfect" costume style piece or cool looking base item.