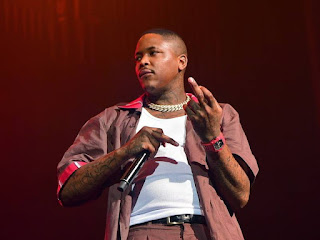 YG was arrested on suspicion of robbery after police came to his Los Angeles County home in the early morning hours of Friday (January 24), TMZ reports. Officials told TMZ that they had both a search warrant and an arrest warrant for the California rapper all related to a robbery case. He's currently being held on $250,000 bail in downtown L.A. at the Men's Central Jail, according to CBSLA.
The rapper's attorney, Joe Tacopina, told TMZ that the charges have "no truth to them." "YG has no idea what investigators are talking about and we have not been provided with any details," he said.
YG's Escalade was involved in a high-speed chase in L.A. in July, TMZ reported at the time, an encounter that reportedly culminated in a 65-year-old man being shot and killed by someone inside the SUV. The rapper, whose real name is Keenon Jackson, told TMZ he was "nowhere near the scene of this incident," and it's unclear whether or not his arrest is related to this case. Police also raided his home weeks after the shooting and made one weapons-charge arrest, though YG wasn't home at the time.
The arrest comes just two days before YG is set to perform at the 2020 Grammys in a group tribute to his friend and collaborator, the late L.A. rapper Nipsey Hussle, alongside Roddy Ricch, Meek Mill, DJ Khaled, John Legend, and Kirk Franklin. YG and Hussle made waves in 2016 with their protest anthem "Fuck Donald Trump," and after Nip's death in 2019, YG paid tribute to him on his album 4Real 4Real.
His attorney, Joe Tacopina, minced no words to TMZ. "YG has a performance scheduled at The Grammys Sunday where he will honor Nipsey Hussle ... so the timing is suspect, to put it mildly."