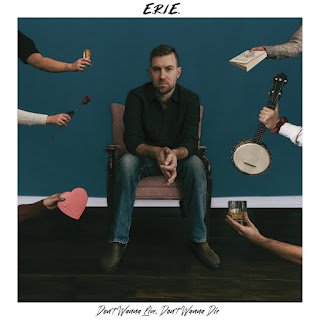 New indie rock group E.R.I.E.released their debut album entitled "Don't Wanna Live, Don't Wanna Die", and it's easy to get hooked on the sound.  At the helm of the project is songwriter and producer TJ Foster, known for his work in other  projects along with his solo career in music. E.R.I.E. takes on a new direction for Foster as the band lays down some real deal classic rock roots. "Fire Away" leads the set of 11 songs that complete the album. You can feel the inner turmoil turn to an inspirational send off as storytelling begins. A great chorus and energy shows it's face while the song grows more powerful. The record plays out with folk-ish sounds and goes back to hitting a harder rock all with a gusto. "Doubt" is a near perfect example of what the record has to offer. Other notable songs include the swing time Americana song "The Background". Along with those, "Fears Come Runnin'" and "Life and/or Death" both very well performed and well written. The record has a terrific concept and to summarize, Foster explains that E.R.I.E.stands for "Everything Resides In Everyone". This is a record well worth a spin.