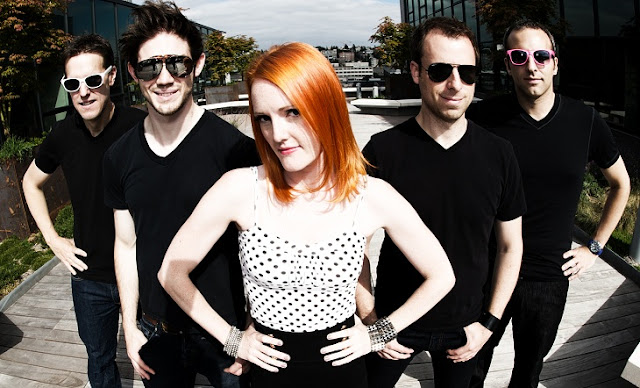 OUT LIKE PLUTO
Webpage: http://www.outlikepluto.com/
Location: Seattle, WA, USA Description:
Where Blink 182, Paramore and No Doubt meet, you’ll find the infectious energy of Out Like Pluto. The female-fronted, Seattle five-piece’s debut—Take Cover, is creating a stir with a unique blend of pop punk and 90’sinspired alt-rock. Biography:
Out Like Pluto is not here to revolutionize music, but they do want to make you dance. Have a listen to their full-length debut album or come out to a show, and it’ll be totally clear: These alt-pop rockers have a blast playing music, and all they want is to make sure their audience does too.
The female-fronted five-piece from Seattle, WA combines the energetic pop-punk stylings of Paramore and Blink-182 with the melodic nostalgia of 90s alternative rock like No Doubt, Garbage and Letters to Cleo. Out Like Pluto's musically diverse, but ultimately light-hearted, repertoire lends itself well to some shenanigans on stage. The band has a reputation in Seattle for delivering unique, engaging, and often hilarious shows. (On several occasions, Out Like Pluto has challenged its bill-mates to pop cover showdowns, for example.) After the now infamous “Ke$h-Off” of 2011, the venue’s sound technician remarked, “In all my years here, I’ve never seen anyone crowd surf in the Jewel Box Theater.” Mission accomplished.
Since 2009, Out Like Pluto has built a rapidly-growing fan base in the Pacific Northwest, and shared the stage with the likes of Nico Vega, Curt Smith (Tears For Fears), This Time Next Year, Hunter Valentine and The Broken Column. Reviewing a show from the early part of 2011, Seattle Subsonic commented: “Given the style and the pretty blond lead singer, the obvious comparison is to No Doubt, but No Doubt was bubble gum in comparison. Songs like “Are We There Yet?” (my favorite) show this well.... It made me wonder. If No Doubt can achieve success and fame, why not these guys?”
Out Like Pluto's debut full-length album, "Take Cover" was released on January 10, 2012. This energetic and eclectic full-length was recorded, mixed, and produced by Andy Tyra and mastered by Gavin Lurssen (All Time Low, Blink-182, Alien Ant Farm). Many of these tracks are already popular with the band’s live fan base, and “Take Cover’s” first single and music video, "Bridge," is attracting a lot of interest on YouTube.
The band was formed in Seattle in late 2009 by producer and drummer Andy Tyra and enigmatic microphone jockey Kari Tarr. Once they realized Andy had too few limbs to play every instrument live, they recruited guitarists (and index finger shredders) Mike Pesce and Ben Ahroni, along with the effervescent Aussie, Jeremy “I am not a convict” Hynoski to bring in the low frequencies. With their new album already receiving positive reviews and an aggressive touring schedule planned for early 2012, Out Like Pluto is pulling out all the stops to bring their own brand of upbeat fun to as much of this world as possible! OUT LIKE PLUTO