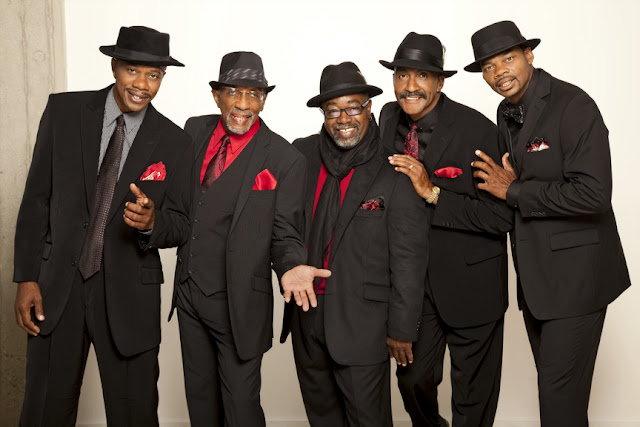 Street Corner Renaissance
Webpage: http://streetcornerrenaissance.com/
Location: LA, CA, USA Street Corner Renaissance
Biography:
Looking forward to the past, Street Corner Renaissance has defied the odds to do what many thought was either crazy or impossible. The group’s founder, Maurice Kitchen, was an accomplished but frustrated 25-year veteran of the insurance industry when he decided to quit his job and form a professional a cappella doo wop group with Torre Brannon Reese, a community youth advocate and founder of a successful mentoring program. They joined voices with Kwame Alexander, a former Seventh Day Adventist minister, Anthony (Tony) Snead, a legal assistant and Charles (Sonny) Banks, a committed golfer and city worker on the verge of retirement. These five distinguished gentlemen of song are now pursuing their dream, a dream they had deferred while dealing with life’s responsibilities. With a determined and changed mindset, their fantastic voyage has begun. "I just didn't want to die a claims adjuster." says Kitchen. "That couldn't have been the last thing on my resume."

Los Angeles-based Street Corner Renaissance offers a unique sound that has delighted audiences at venues throughout the country, including theaters, performing arts centers, elegant cruise lines, colleges and clubs. “We were honored to have been invited to participate in UCLA’s week-long Festival of African-American Music Symposium, right out of the gate,” said Kitchen, referring to a gig in the group’s early days. The festival was a comprehensive event hosted and produced by world-renowned guitarist Kenny Burrell. Street Corner Renaissance shared the stage with accomplished performers such as Nancy Wilson, George Duke, Patty Austin, Freda Payne, Linda Hopkins, Lalah Hathaway, Dianne Reeves, Gerald Wilson and Patrice Rushen, just to name a few. Following that debut they opened for the well-known a cappella group Take Six at Debbie Allen’s “Smile Festival” and performed on-air with the legendary Stevie Wonder and renowned poet Nikki Giovanni. “To start out performing with such a stellar lineup was all the encouragement we needed. We took it as a resounding endorsement that the music we’re committed to had a valid place in the broader cultural and musical landscape,” remarked group historian, Torre Brannon Reese.

If the group wasn’t convinced by the reception they received at the festival, then the overwhelming response they garnered for their debut recording “Meet Me on The Corner” removed all doubt. Then, in an unprecedented move, promoter Roland Betts invited them to perform at the prestigious “Jazz at Drew Festival.” They wowed the audience and made festival history as the first a cappella group to perform at the perennial event. In a bold show of support for their talent and their mission, Betts scheduled them to open on consecutive nights for the venerable Impressions and popular funk band Lakeside. Other acts on the bill included Hubert Laws, Jerry Butler, Sheila E., David T. Walker, The Mighty Clouds of Joy and other cross-genre luminaries. Street Corner Renaissance went on to open for such top acts as the legendary Chuck Berry, Kool and the Gang and the top-selling male R&B singing group of all time, Boyz II Men.

These gentlemen can flat out sing and their infectious energy and soulful voices transport their audiences to another space and time. Not just another singing group, Street Corner Renaissance intertwines themes of social and cultural awareness into their music, offering “food for the spirit as well as the soul.” Whether it’s a soul-stirring tribute to the legendary Sam Cooke, street corner crooning for the ladies, Black history-themed conscious music or a rousing gospel celebration, their superb vocal skills shine through. “We’ve closed the generation gap for vibrant baby boomers who dare to dream the impossible dream,” says Kitchen. “We want to be voice of a new revolution to reclaim our culture from the age of innocence and unbridled ambition. Hence our name, Street Corner ‘Renaissance.’” Street Corner Renaissance