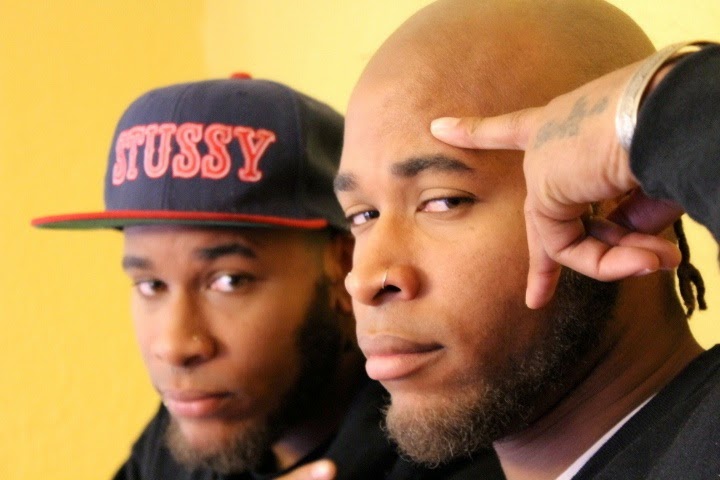 To those who meet them, hip hop artists Jarred and Johnathan Lindsay, better known as Mackamillion and Mr. Mackmore, present a Double Vision, and not just because they are twins. Their group is DV, short for Double Vision, and their music captures a bold vision of both simplicity and intellectual intensity. The vision is unmistakable in their latest EP, (Ra)w Form. Mackamillion explains that “Raw form is about finding the God in you or the Creator within yourself.”
Even the title’s spelling, (Ra)w, has deeper meaning: that the process of creating anything, be it music, money, or even another being, starts from the same source, the raw energy that permeates the whole universe, known by some as God, or love, or universe, or Amen Ra, aka the Egyptian Sun God. And Ra, explains Mr. Mackmore, is “a primordial sound which holds a vibration of creation.”
The duo hail from Venice, CA, and have spent most of their years shuffling back and forth between the midwest and west coast.
And they’ve been making rhymes before they were out of their Underoos and shaking up hip-hop stereotypes ever since. “When we started, it was the bling era of hip-hop,” explains Mr. Mackmore, “so we were different from the norm.” Their “ahead-of-our-time style” has been magnetizing audiences by addressing issues of the common folks, a far cry from the typical “iced out jewels” and drug dealers stories of the notorious past. It was in '08 that they released the independent full-length, "No Explanation!" Two years later they dropped their label debut "Bifocal," an EP released on No Sleep Records. Now, with the release of (Ra)w Form, they have simplified their name (DV) as well as their music. Simplified or not, DV consistently holds ultimately to just one vision: to make music that is, as Mackamillion describes it, “innovative and creative, and made for those who actually have a brain."