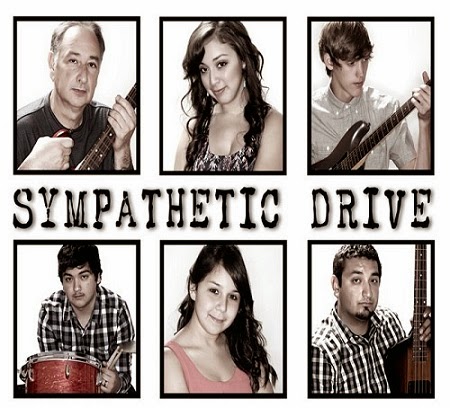 Sympathetic Drive got their start playing for special occasions at family gatherings.  What started as a dream for me, to play music together with my sons and daughters, has morphed into a reality. The band, influenced by a variety of different music genres, started doing cover songs and now has produced original songs for our 1st CD. The variety of music played by the band includes; Latin pop, rock, and pop music. Although having different genres thrown together is considered uncommon, we decided to go against the grain and be ourselves.


A lot of fathers might have musical ambitions for their kids. But not so many end up forming a successful band with them.


For Daniel Ramos, though, that is exactly what has happened. From playing at intimate family gatherings in San Antonio, Texas, Ramos, his two sons, two daughters and a close family friend, soon started developing a sound all of their own – and a fanbase to match. And so, Sympathetic Drive was born.


It’s a long way from practicing in the garage to releasing a debut CD, but Ramos and his family have now done just that, with the long awaited debut of their first record, also called ‘Sympathetic Drive’.


It is a record that perfectly showcases the style and sound of Ramos and his hugely talented kids: David, Analisa, Javier and Megan, as well as guitarist, vocalist (and friend) Danny Blake. These are songs that reflect the frontier world where the family grew up; a world where rock and roll meets the Latin influence from across the border, and where music is a way of life.


The original songs on this collection carry some of the edge of today’s most experimental bands, like Queens of the Stone Age, while retaining the pop sophistication of a songsmith such as Enrique Iglesias. And most of all, they reflect the sound of a family that loves playing music together.


Each song is also very personal, telling a different story that has meaning for a different member of the band.


It is the mix of the personal and the universal that makes Sympathetic Drive a great band – and this, its first album – a great record.


Whatever happens from here, the Ramos family has already come a long way – and has even further to go. Join them for the ride.