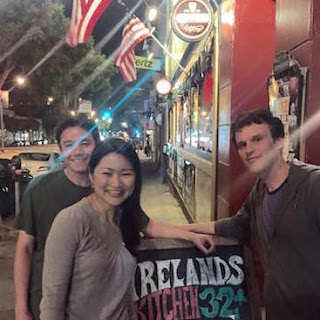 John Vanderslice and 87 made a record at Tiny Telephone!!!
We had a great time hanging out with JV as he produced and played on our new release!!!!

We are on college radio all over America!

“Our featured performer this week is a duo that has wowed us with their creativity and talent these past few months, PATRICK & HANAKO. (OF THE BAND 87) Seriously, this will be a fun set, expect the unexpected!” - Brendan Getzell, Hotel Utah Saloon

We landed in San Francisco from different places. Patrick was born in Atlanta and has spent much time in Athens, Georgia and Seattle. He has always been into unique Indie Rock. Hanako is from Yamanashi, Japan and has spent a lot of time singing and playing Jazz in Tokyo. Nate hales from the tiny Wisconsin town of Black River Falls where he was influenced by Classic Rock. He moved to SF with his band from Madison. We think this odd mix of backgrounds and our willingness to experiment leads to songs that are different, interesting and weird.