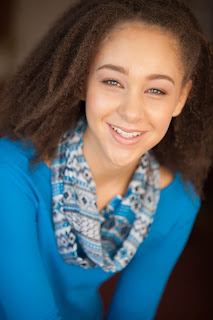 Briannagh Dennehy, was born to Tessa and Terrance Dennehy on October 1, 2001. Having been raised in the New York area, Briannagh incorporates and represents American diversity and pride into her music. As the daughter of a Caribbean mother and Irish-American father, and being raised in the New York Metro area, Briannagh has had the privilege of being exposed to a multitude of cultural facets that have helped mold her into the young sensation that she is today. At the age of eleven, Briannagh was one of the final four contestants in the youth category Amateur Night at the Apollo Theater in Harlem (2013); as well as a finalist in Deborah’s Got Talent, a fundraiser for Deborah Heart Hospital in New Jersey (2013).

An accomplished pianist, she is asked to perform in public throughout the year. Additionally, Briannagh sang the National Anthem at the opening of a Somerset Patriots baseball game (2013), performed in the Princeton Ballet’s renditions of “The Nutcracker” at the McCarter Theatre in Princeton, NJ and the State Theater in New Brunswick (December 2012). Expanding her resume, she has appeared in several television commercials and print advertising for Forman Mills clothing line and in a short film entitled, “Cake” directed by a NYU Tisch School MFA student that was submitted to a film competition in 2013. Briannagh is currently working on her material for her first album. She gained significant praise and recognition from her peers and fans with the single and video “American Fab Kid” she released in 2012). Both the song and video reflect American diversity and pride, expressed through fashion. A young, vibrant girl full of talent and ideas, Briannagh Dennehy aims to inspire other girls her age through video, song and dance. with her next single, “Stand Tall” which aims to encourage kids to believe in themselves and follow their dreams when other people are trying to discourage them.
Briannagh D is at it again! This time, her new rendition dubbed, "Everlasting Love" showcases her budding talent and her growing musical passion "Everlasting Love" is a vibrant and incredibly soulful masterpiece that is the embodiment of love in all facets of life. It is ode to the significant people in our lives who continue to inspire us. In her new song, Briannagh honors mentors and guardians, including parents, grandparents, aunts, uncles, teachers, coaches or anyone who serves as an inspiration for others.  Miss Briannagh Dennehy, has arrived and ready to make a positive, lasting impression on her peers for generations to come!