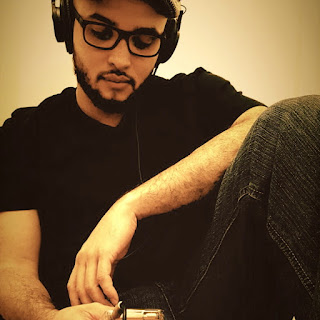 As owner and founder of The Forward Progress Sound (TFPS), composer, music producer, audio engineer, songwriter, and multigenre artist, Eddie S.G. is simply a music geek. As a kid growing up in Queens, NY, his passion for music began with his parents and in school. Rock ‘n’ Roll, Salsa, Merengue, and R&B were always in the air around the house, as poetry and playing clarinet in the school band became his hands-on access to creativity. Trouble at home forced him to leave at age 16. From that point on, music became more than just something in the air to him. It became his outlet. He started inking his thoughts, rhyming them, and then turning them into lyrics.

Eddie S.G. signed up to join the Marine Corps in his senior year of high school and left for bootcamp after graduating. After a 7-year career and one year as a Boeing contractor living in the UK, he decided to return home to pursue a higher education in music. He graduated from the Institute of Audio Research with a diploma in Audio Engineering and Music Production in 2010. Afterwards, he attended Fordham University, earning a Bachelor of Arts in Music in 2014. In October 2014, he founded TFPS and began releasing music under his label.

Although Eddie S.G.’s first love is Hip-Hop, he is also passionate about Classical, R&B, Rock, House, EDM, and New Age and tries to listen to everything in-between as well. He takes pleasure in creating music, not worrying about blurring the lines of genre. The music that pours from his heart is dark and deep. Whether with lyrics, instrumentation, or both, he prefers speaking through music, making his sound very personal. This is especially so since he is rather quiet otherwise.