John Hines and Donna DeVine with great jazz music....put me in a calming mood 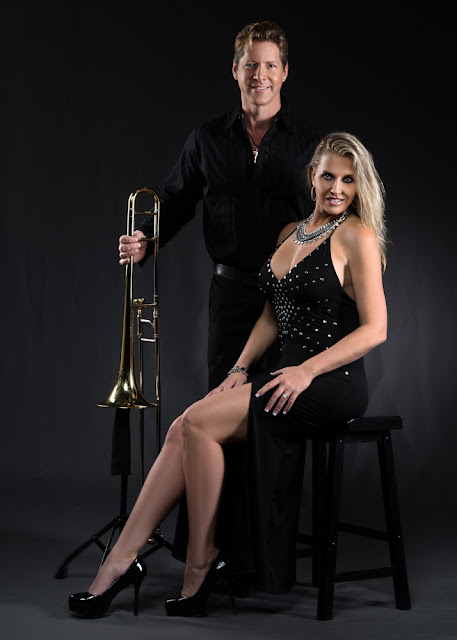 John Hines came out of the successful, state championship student jazz program at Valley High School in West Des Moines, Iowa. After studying under Ray Smith (Brigham Young University) in Provo, Utah, he played with the internationally known big band, Synthesis, including opening for Gerry Mulligan's big band at the 1988 Montreux Jazz Festival, and for Carlos Santana at the 1988 Antibes Jazz Festival outside Monte Carlo, France. After building a successful career in advertising and technology marketing, he picked up his playing pace when he moved to Denver in 1993. While still doing it on the side, he plays professionally for several orchestral and jazz groups in and around the Denver area, including frequent performances with his own John Hines Quintet/Hines DeVine Jazz.

He was an active supporter of the Colorado Jazz Workshop for several years, primarily under the tutelage of trumpet virtuoso Hugh Ragin, and is involved with several efforts to bring more jazz to Denver.

In 2004, John was signed to the Capri Records label, and released his first major CD, 'In The Pocket,' which was met with significant critical acclaim. The title song, an original by Hines, was a finalist in the 2005 International Songwriter Competition in the Jazz category. John was also a featured ensemble player and soloist on the 2005 CD release, 'Pag's Groove,' by composer/arranger/ pianist Michael Pagan (also under the Capri Records label).

His playing has been described as being a mix of Curtis Fuller and Steve Turre, but with an almost “vocal quality” that makes him easy to access and internalize.  And his compositions and arrangements are all solidly rooted in jazz melodies which feel good to the listener.  Think of him as the “Chuck Mangione of the modern jazz trombone.”
? According to Ann Braithwaite:

“Hines' trombone voice is striking in its tonal clarity, and he never succumbs to mawkishness. Hines has an attractive musical personality that's shaped by familiarity with his instrument in the jazz past and present. His articulate lines suggest those of Curtis Fuller, the renowned Jazz Messenger and Count Basie sideman, in their pleasing melodic disposition. Hines's musical ideas draw on swing and bebop but also on jazz from present times; contemporary trombonists Steve Turre and Robin Eubanks would join older players Slide Hampton and Bob Brookmeyer in approving of what results from his creative thought. The colors and accents Hines tucks into the flow of each of [his] tracks keep the flow of the music constantly riveting to the ears. Glad to say, first-rate musicianship goes hand in hand with the carefully managed emotion at the core of his playing.”

John can be heard regularly throughout Denver with multiple big bands, as well as his and Donna’s own sextet, Hines DeVine Jazz, which is a strong, accessible ensemble consisting of Trombone, Trumpet, Piano, Bass & Drums, and featuring the talented and beautiful Donna DeVine on vocals. This group has gained a following by playing a wide range of both original and familiar music which is ever-changing and always surprising.

This is the only group actively playing trombone-vocal jazz duet arrangements, providing an intriguing combination which connects with listeners both young and old, and introduces them to a whole new way of looking at jazz music.

Donna DeVine is one of the strongest vocal jazz artists today, but she didn’t just start there. She started receiving recognition in her home town of Roseburg, Oregon, by being selected as a freshman to play the lead Marion the Librarian in the 1982 production of ‘The Music Man.’ It sold out every show at a large college auditorium, adding additional shows by request. The show was met with such notoriety that the cast of University Of Oregon, who was performing it also that year, came to see the production. She followed by lead roles in multiple musicals, most notably her stirring 1984 performance as Maria in ‘West Side Story.’

She brought this solid start as a powerful vocalist in the Purduettes Show Choir; auditioned for in strict competition at Purdue University. She was selected as one of the three leads in the Purduettes’ jazz touring trio, singing to 50,000+-sized crowds and doing alumni tours all over the state of Florida and extensively in Indiana. She was awarded the coveted title of Purduette of the Year in 1991.

In 1996, after relocating to Denver she took a step to tackle another musical style by becoming the lead singer in a crossover country-rock band called Prairie’s Edge, honing her modern country/rock music singing skills all around the Colorado region.

In 1998 Donna became the lead singer in a Rock band which she co-founded called Flash Point, where she grew to love and know the power of performing classic contemporary rock and pop songs with a strong rock guitar and percussion ensemble in and around Denver.

In 2004, after meeting John Hines, she returned to her jazz roots by becoming his lead singer. Her ability to absolutely mesmerize a crowd was instantly recognized, and only grew over time. Because of her diverse vocal experience over the years she has brought an ability to sing not only the timeless jazz standards, but also contemporary, popular songs ranging from Janis Joplin and Tina Turner to Norah Jones, Queen Latifah, Diane Reeves, Sting, John Lennon, and even Lady Gaga.  The versatility that she brings vocally to the group brings ‘a little something” for everyone to enjoy.  The trombone-vocal duet arrangements of these songs bring a fresh new twist to melodies which instantly connect in a whole new way.

She can croon with the best on the jazz ballads that can bring goose bumps, and in addition you can hear Donna’s strong, clear vocals on more modern songs like “Mercy, Mercy, Mercy” and ‘You & I.’ In an era where true vocal talent is often overshadowed by quirky, warbly pop singers, Donna’s pitch-perfect, expressive tonality and remarkable stylistic range will be a welcome, refreshing addition to any jazz library.