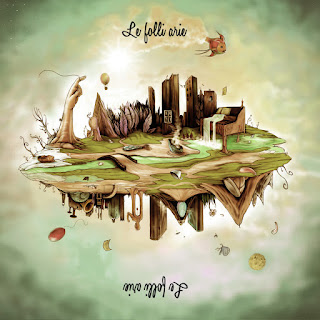 Le Folli Arie become a reality in 2012. The band is made of four musicians living in Milan that have a huge live experience. They all have worked in various musical projects and share a common love for music from the 70's(Yes, Genesis, Pink Floyd, PFM, Banco di Mutuo Soccorso, Area,...). They have also been influenced by grunge, pop, latin, funk, jazz, heavy metal. The clash and melt of all these musical influences gave birth to Le Folli Arie's unique style.
The process of making the band sound whole and unique required 2 years of labor-intensive work.
Once you listen throughout the album you can perceive the binding that gathers the 13 tracks together.
The listener is able to experience many extremely different atmospheres and emotional episodes and to appreciate a deep sense of coherence throughout the entire listening experience.
That's why defining Le Folli Arie's style is not a simple task: it could be prog music dressed as pop or the exact opposite.

In a world dominated by media where the key word is appearance, Le Folli Arie take a brave and anacronistic choice: you will be able to see them only during their live shows.
There will be no official photo shooting sessions, they will not appear neither in their video clips nor on their cd booklet, promotional posters and so on... They would rather release written interviews or be interviewed on the phone whenever that is feasible.
The utopic point behind this choice is to communicate with their fans through their artistic means only avoiding any other interference as much as possible.
There will be no void in the visual compartment though. Matteo Compagnoni, (www.facebook.com/MatCompArt)already responsible for the CD artwork, will tell Le Folli Arie world,
through his surreal and visionary, evocative and disturbing drawings.

Making their own way through echoes of Jeff Buckley, Led Zeppelin, Pink Floyd, Genesis, Yes, Porcupine Tree, Lucio Battisti, PFM (and many more...) Le Folli Arie's first work is a true musical voyage you could easily get lost into, that gently flows with no discrepancies; sounding almost "concept"!

Le Folli Arie is on the run!