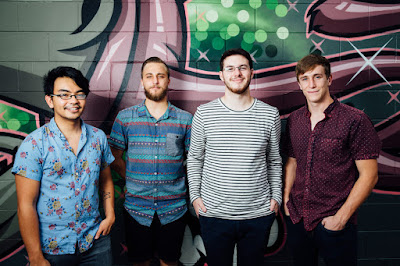 It’s in circuses and festivals where every view that greets the eye is spectacular and alluring. Abnormality is celebrated and human dilemma, outside the fair gates, becomes an afterthought. Beneath these carnival lights, Pathos, Pathos is the search for euphoria along a path obscured by obsession, longing, and doubt.

About the band: Pathos, Pathos is an indie/pop/rock band out of Orlando, Florida. The band’s debut album, Familiar Homes, focuses on human connection and the interplay between fantasy and truth, between promiscuity and virtue, and between death and ordeal. The album’s release show was extremely successful with a crowd of 100+. This summer they went on an East Coast tour drawing in crowds each night, and playing venues like The Bowery Electric in New York City. They have drawn quite the crowd here in Orlando as well, playing top tier venues like Backbooth and Will’s Pub. The guys have finished recording their sophomore release, Pet Names EP and will be releasing it in July of 2016.
Please get in touch with Matthew at pathospathosband@gmail.com for further information including guests lists, interviews and copies of Familiar Homes as well as the first single from the upcoming Pet Names EP.