THE DIRTY EARTH ASCENDANCY is Flyah 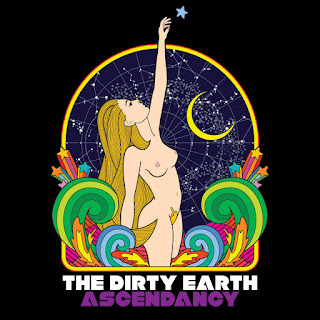 There is nothing so fine as a righteous blast of rock and roll energy, a whitehot mainline that shakes your body into action....

You know it, that moment when the guitars and the drums and the voice all hit it together, when your own space in the world lights up and the experience leaves a manic grin of exhilaration plastered across your face.

The Dirty Earth do that, it’s their mission. This band play music so they can break free and fly, hit that space. C’mon, join their Rock And Soul journey.

Mandy's at the microphone, gospel of soul in her veins. She’s sung jingles, blues, sleazy punk and everything in between and she sounds as comfortable belting out gritty rock anthems as she does steamy blues numbers. Raff’s flicking riffs off of his fingers. He honed his sonic storms up and down the East Coast in a snarling stoner rock band. Darren, lays down dirty, monster, grooves that thunder and roll like a hurricane. Behind the kit is Leon. The journeyman drummer and a veteran of the Aussie rock circuit who pushes the band out to the edge

These folks - seasoned muso's - have been around the block a few times, independently sharing stages with some impressive national and international acts. They've won awards and plaudits, featured in movies. They’ve lived it, played it, their skill and artistry and attitude have come together at the right place and time in a fireball of rock and roll.

Described once as "like the love child of Suzi Quatro and Sweet, who's been babysat by Rose Tattoo", The Dirty Earth is one shit hot band that will rock and roll your today and all your tomorrows.

Sydney, Australia’s grittiest export The Dirty Earth just released their second full-length album titled Ascendancy and crikey, what a freaking powerhouse the effort is! Ten songs of adrenalized Blues Rock that possesses blatant draws from Stoner and Classic Rock, all in full effect with relentless determination to set itself far apart from most of the mediocre fare flooding the scene. The guilty parties here responsible for this soul-infused smash are guitarist Raff Iacurto, bassist Darren Staite, drummer Leon Cadden, and last but not least, the vocal dynamo that is Mandy Newton. This foursome have tapped into some intensely rocking force, the real thunder from down under, that drives this album ever forward and never lets up from start to finish. The guitar riffs are hugely mountainous slabs of solid steel and are only topped when Raff breaks out the scorching leads and places them like cherries on top, all while the steam engine-strong rhythm section pounds out a concrete dense foundation beneath. But alas, the real highlight and treat here is the furiously blinding vocal performances of “Manic” Mandy who channels a sultry, coarser Stevie Nicks with a little Melissa Etheridge thrown in for good measure and intent on surging the needles past the point of no return. She’s just relentless and one of the best female vocalists I have heard in recent times.

The songs on Ascendancy are flawless, arranged with such fine precision that every note, every nuance is positioned to yield maximum results and just one listen to the album opening “Lay By The Son” hooked me like audio heroin. I had a hard time getting on into the remainder of the record because of hitting repeat on this track alone twenty-some umpteen times but eventually I did and each new song brought further and further amazement to be honest. While the whole record is stellar, I did find certain tracks to be stand-outs like “Lonely“, “Cruel World“, “Fierce Goddess“, and “Eternity” but there’s not a lame cut on this outing and if you want to enjoy some real, radically rocking barnstormers then hit play in the widget below.