The Jewell Thieves are awesome!!! 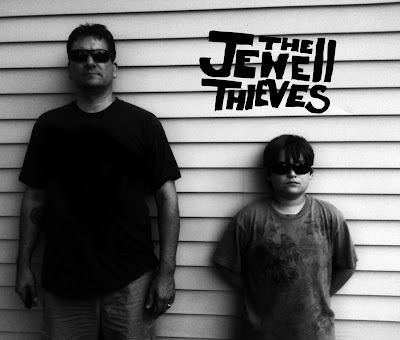 The Jewell Thieves are a father and son, independent, Boston-based alternative rock band, bringing attention to 11-year-old singer, Nick Jewell and a mix of music styles that make listening to independent music fun. What started out as a side project turned into an opportunity for us to learn, create and entertain our friends, family and fans together.
Mike Jewell is a talented, results-oriented Marketing & Sales Professional with a proven record of accomplishment in planning and leading comprehensive marketing & sales strategies in support of business goals and objectives. Expertise in directing the creation of marketing & sales tools and driving the execution of marketing & sales programs. With a do-what-it-takes attitude, demonstrates success driven growth in targeted markets through implementation of key projects. Solid leadership skills; able to build and guide top-performing team players with a sense of urgency. Able to communicate effectively to sales teams, management teams, vendors, and internal departments to coordinate overall marketing and sales efforts. And when he is not doing this, he writes, records and plays music, while encouraging his son to dream.
Nick Jewell is a dedicated 11-year old student. When not in school, he is usually learning the newest song or trying his own,  plays hockey, sings, plays guitar and defeats other tribes on his iPhone. Occassionly plays a few house parties.

Boston, Massachusetts - The Jewell Thieves, Mike & Nick Jewell, a Boston, MA, independent alternative rock band, are proud to announce the release of their first EP, Tainted World. It features 5 songs, runs at about 22 minutes and is a collection of electronic, ambient, alternative rock songs with surprise vocals from 11-year-old Nick Jewell.
In the not so distant future, Earth has finally been eradicated of all its natural resources. There is nothing left and remaining means the end of humanity's existence. By taking this risk, the remaining population will transport itself into the unknown, find a new planet, find a new home. Tainted World is a short story on what it means to leave the planet and suddenly be thrust into space looking back at what was left behind and loved the most. To believe is to hope, "as man was meant to explore".
“I have always been a fan of science-fiction from the 50’s, specifically the writings of Ray Bradbury, Isaac Asimov and Philip K. Dick,” says Mike Jewell. “The idea that we would need to leave this planet in order to continue as a species is very appealing as a writer. I mean, how would we really go about that? Especially since the space program hasn’t really addressed space travel in years. The fact the environment is such a hot topic also inspired us to tell the story.”
As part of the EP release The Jewell Thieves also released two singles as digital download, We Need to Leave, Now and The Future In Your Eyes through TuneCore that you can find on iTunes, Spotify, Amazon Music, Google Play and many other stores.
Track List:
Gaia’s Wrath
We Need to Leave, Now
Ascent From Terra (and those left behind)
The Future In Your Eyes
Deep Dreams in Stasis

Bonus Track - Little Dream Daydream Believer
To listen and download the full-length EP, please visit The Jewell Thieves, Tainted World.
The Jewell Thieves are an independent alternative rock band, located in Boston, Massachusetts, that was formed in 2014 by Mike & Nick Jewell.
Visionary[s] is an outsourced marketing and communications service that creates and executes strategies that generate growth and awareness for a variety of clients.