Baltimore Ledge and Mulan are His and Hers - Flyah Review 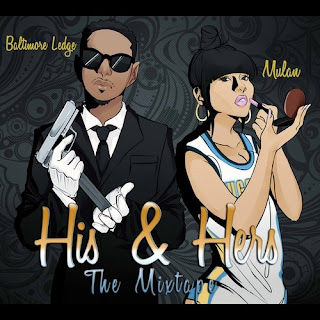 Baltimore Ledge and Mulan are a duo who have made

a project entitled: His and Hers: the Mixtape. On the first track,

"Ranch Dressing", Baltimore Ledge's verse is about having the

ambition of earning money and one night stands. When Mulan has

her chance to rap, she describes of what being the baddest chick is.

All throughout the mixtape, they present slick bars at the same

time showing that they're clever with punchlines. The thing that

eponymous sports news show on ESPN, His and Hers. The

explosive and coining their style without a problem. The track that

stood out the most to me with clever punchlines was "Cosby

Show". It starts off with hot rhymes from the gate and Baltimore

Ledge continues on with aggression and execution. Me being an

artist, this is one of the most intriguing details of hip hop, being

able to execute. Their style is reminiscent of the 2000's and artists

among others.The song "Mark" enlists for a couple to make their

mark per say in a relationship; the lyrics discuss on how heartbreak can come between a

man and a woman and someone else can persuade the other to find better. Sometimes the

from this view and lifestyle. In return, the mindset of M.O.B. is popular in the

parties. Overall, this mixtape is a success and presented with different outlooks of how the

gangsta life and companionship between man and woman. The cover is dope and when it

first starts, it catches the ear bringing in the motion picture effect. If i had to rate this, i would give this project 8 out of 10