'This is new territory for everyone': Tech giants Amazon and YouTube have an opportunity to upend the regional sports TV business 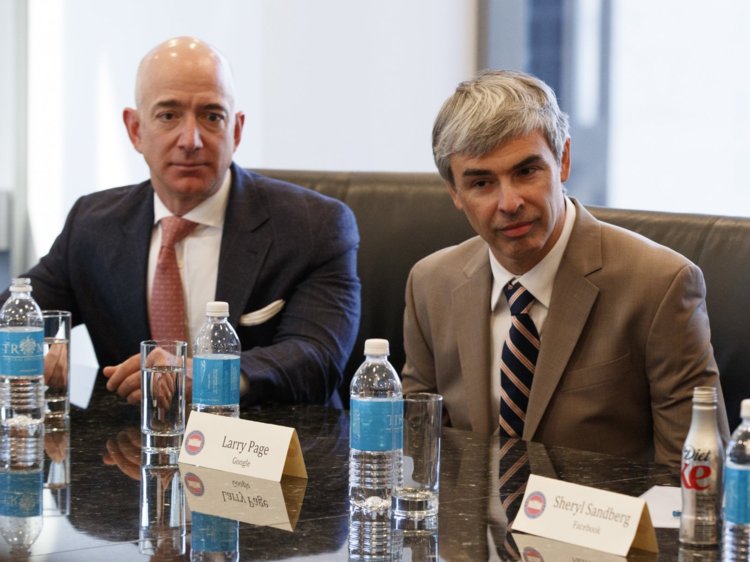 Amazon's Jeff Bezos and Google's Larry Page might be in the bidding for regional sports. AP
Twenty-two regional sports networks are expected to come up for sale soon, and the very companies leading the cord-cutting revolution could end up bidding for these linear-television networks.
It's all part of Disney's deal to buy assets from 21st Century Fox. The US Department of Justice approved Disney's proposed purchase with one big condition: that Disney sell the regional sports networks that Fox owns to avoid anticompetitive conflicts, given its majority ownership of ESPN.
The size of the RSNs coming to market has attracted broad interest from buyers. Fox has 22 networks and analysts have predicted they could draw as much as $20 billion in value. While traditional broadcasters like Sinclair are among the parties interested in purchasing the RSNs, Amazon and Youtube have also expressed interest, according to Bloomberg.
These two tech companies are seemingly unlikely players in the regional media buyer space.
"This new territory for everyone," Lee Berke, CEO of LHB Sports, Entertainment & Media, Inc., told Business Insider. "These are distribution platforms and businesses that weren't in existence two or three years ago."
Why would tech companies want these assets?
Amazon and YouTube have streaming ("OTT") platforms with national distribution strategies. A move to buy these RSNs would signal a change in business strategy and and first foray into regional sports rights on a large scale, according to sports-media analysts who spoke with Business Insider.
So why would tech companies want these assets?
The answer, in part, may lie in the sheer size of the assets coming to market. These are 22 networks that have the broadcasting rights for 44 professional sports teams in the National Basketball Association, Major League Baseball, and National Hockey League. The networks offer local-sports broadcasting for teams like the Cleveland Cavaliers and the New York Yankees.
Fox owns over 50% of the market. The next biggest owner of RSNs is Comcast, which has seven RSNs representing 16 teams, followed by AT&T with four RSNs and eight teams. Even though these assets broadcast regional programming, owning the entire block is akin to having a national presence in regional sports.
The volume of games played in these leagues also make the regional networks attractive. MLB teams, for example, play 162 games per year, meaning near-daily games during the season.
Linear broadcasting wouldn't change much to begin with
A tech company buying these assets wouldn't change much from a viewing perspective. The RSNs are self-sustaining businesses and could effectively run on their own. The RSNs already have contract rights in place for both linear and digital distribution of their programming.
For example, the Yes Network — home to New York Yankees and Brooklyn Nets coverage — has existing contracts in place to stream on platforms like Hulu, Sling TV, and DirecTV.
Each RSN has its own set of distribution deals and distribution contracts typically have an average span of three to five years, according to Berke. If a technology company with an OTT service bought an RSN network tomorrow, it would be able to offer the network on the service right away. But it wouldn't have exclusive rights to air the programming until contracts expired.
So while tech companies like Amazon and YouTube likely see an opportunity to distribute exclusive sports rights on their own OTT platform in the future, the programming would still have linear-TV distribution in the near term.
In fact, Amazon or Google buying these RSNs may signal acknowledgement that linear TV isn't dead. There are still significant numbers of pay-TV subscribers. At the end of 2017, 94 million subscribers paid for traditional TV.
"It's almost like going backwards in time a little bit," Daniel Cohen, senior vice president at Octagon, told Business Insider. "We see more and more viewers cutting the cord, buying these a la carte digital products and services ... now they are almost going backward and saying linear broadcasting, if they bid, is going to be important to us."
One short-term challenge for the two tech players would be the regional advertisements that go with regional linear programming.
"They are not in the business of really selling regional ads against live sporting rights yet, and I think that is going to be one of the major hurdles for them," Cohen said. "If they make a play for this I think ramping up on a regional sales side would be critical."
And there's an OTT opportunity in the future
While going regional would be a shift in strategy for Amazon or YouTube, the companies already have the technology to regionalize digital streaming content.
"I've been in negotiations with various vMVPDs (Virtual Multichannel Video Programming Distributors, or TV delivered over the internet) ... they can geofence content on a zip code to zip code basis," Berke said. "In certain respects that is more fine tuned than with pay television."
YouTube has already begun to strike a few regional-sports deals. It has exclusive rights to Major League Soccer's Seattle Sounders FC and Los Angeles FC regional games.
While Amazon to date has not offered up regional content within the US, it regionalizes on a continental basis. Amazon has exclusive rights to air US Open Tennis in the UK and exclusive rights to air some Premier League soccer games in the UK. If Amazon acquired an RSN, it would be "extremely feasible" for the company to regionalize content in the US, according to Berke.
And owning sports rights could help with the problem that one in five Amazon subscribers doesn't know they have access to streaming videos through Prime Video.
It's unclear if Amazon and YouTube will bid on regional networks where their OTT services don't immediately own exclusive rights to programming. Still, you can never count out the ability for these tech giants to outbid the competition.
"From a bidding-power perspective, they are in the best position to make any transaction they wish," Cohen said.