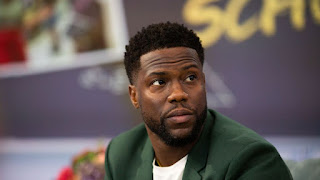 Kevin Hart has been ordered to pay $700,000 to his former business partners, who accused the comedian of screwing them out of millions.
According to court documents obtained by The Blast, A New York judge sided with the comedian's former business partners at iGo Marketing & Entertainment in the multi-million dollar lawsuit they brought against Hart.
The judge ordered," that the defendants shall remit payment to the plaintiff in the total amount of $701,539.73 within sixty (60) days of the date of this Order."
The decision brings an end to the case that has dragged on for nearly two years.
Back in 2017, iGo Marketing & Entertainment sued Hart claiming they entered into a deal with him to negotiate marketing and celebrity tie-in deals on his behalf. iGo has worked with Jerry Seinfeld, Jamie Foxx, John Legend and many others.
They claim their deal with Hart called for them to get paid 15% on any deal they negotiated for Hart.
In the lawsuit, iGo claims they secured numerous deals for Hart over the years with the likes of Miller-Coors, Coke-Zero, Vitamin Water, Electronic Arts, two deals with Caesars Entertainment, the Cosmopolitan Hotel and a deal with Verizon Wireless.
They claim Hart always made good on the deal … that is, until it came to a deal with Rally Healthcare in 2015.
iGo claims they negotiated a three-year deal between Kevin Hart and Rally that called for the comedian to get paid partly in cash and part in stock options.
In 2015, Hart then terminated the deal with iGo but they claim that didn't allow him to stop paying the commission on deals they locked down. They claim Hart did not pay them their 15% on the third year option of the deal or for the value of the stock option.They sued for breach of contract and sought no less than $1.8 million from the comedian.
Hart responded to the lawsuit, claiming he never had a written agreement with iGo. He also claimed since the third-year option to the Rally deal kicked in after they parted ways, he didn't owe them 15% of that money.
Hart counter-sued iGo for allegedly using his name and likeness for marketing on their website without his permission.

The comedian demanded the lawsuit against him be dismissed and he be awarded unspecified damages for the use of his image. He also sought an injunction against his ex-business partner from continuing to use his name and likeness to market themselves.