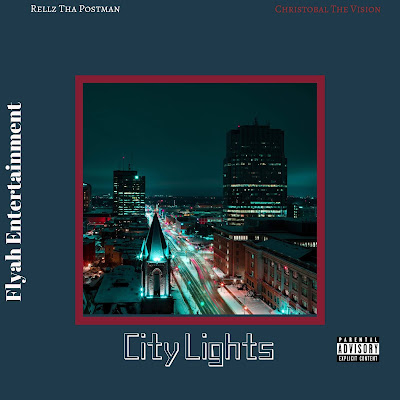 The Postman and The Vision are back again with a Lofi classic entitled City Lights.  The hip hop duo elaborate on living in the chilled streets of Virginia as a young music inspired male in the 90s.  Things like the influence of pop Culture and upbringing of their grandparents make these young hero’s exciting and determined to win.  The track was produced by Super producer Dream Life Beats who is affiliated with the Jee Juh Production team.  Rellz reflects on being raised on the country side of the state but still being marveled by cities such as Virginia’s capital Richmond.  He speaks of riding to the studio with his best friend Willy Phontane on a summer night.  Even though the city can be dangerous the hip hop phenom mentions that he enjoys every moment while knowing his limits. Christobal brings in the words that paint a beautiful Picture of being a local.  He sheds light on cruising the highways playing smooth music such as Chrisette Michelle.  After talking to Rellz Tha Postman and Christobal The Vision, I was informed that they are working on a new EP for this Fall entitled Bars from The Zoo which features tracks with D Swiss, Denny Mild and ILL Badaa.  Rellz is also the creator the brand Sorry Robot.  Throughout the year the Brand has released music merch and comics through social media.  Check out city lights below and the official site of Sorry Robot Here
Click Here to Visit RespectRobo.com