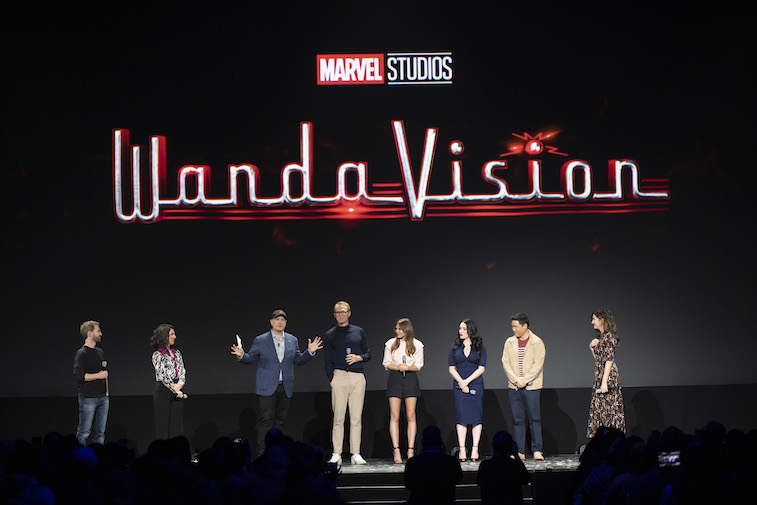 Marvel is already going on a tear announcing their upcoming streaming shows on Disney+, whetting appetites for things like WandaVision. If it seems like two years is too long to wait, you probably forget how fast time goes. When it's available, it'll likely become one of the most popular streaming Marvel shows next to Loki.
Of course, we're just assuming this based on the popularity track record of Marvel. We won't know anything until 2021, but WandaVision's success will depend solely on the writing and the cast itself.
Having Elizabeth Olsen at the helm will help considerably thanks to her respected acting pedigree. Nevertheless, it's worth looking at a few details on whether there's a magic formula here above the reported cinematic production values.
According to Olsen, the show will be a mashup of genres

The Ultimate Disney Fan Event | The Walt Disney Company/Image Group LA via Getty Images
Don't go into WandaVision thinking it's going to be typical Marvel fare. Elizabeth Olsen (plus the entire cast) were recently interviewed about it by Entertainment Weekly, with Olsen revealing it's a mashup of American sitcoms and the Marvel universe we've grown to love.
If this sounds kind of surreal, you're probably right. Yet, you had to feel for the cast in their reveals because they spoke in hesitating tones to not dole out any spoilers. At least Paul Bettany continued by saying the initial mashup is a bit of a ruse. Apparently the show will blossom into an incredible Marvel movie.
For those skeptical about whether Marvel can win over people in a streaming format, you don't have to worry about lack of cinematic pedigree. The budgets put into this and the other MCU shows are reportedly over the top, meaning they'll be setting new precedents for everything else.
We all know this will attract millions initially. What about the appeal of Scarlet Witch herself as a favorite character?
Adding telekinesis and telepathy to the mix could make for added fun
Those of you still new to Scarlet Witch (Wanda Maximoff) should know she's always been considered a second-tier character, yet a longtime favorite in Marvel comic books. For a time, there was a tug-of-war between Fox and Marvel's overuse of the character on the big screen because Marvel once loaned out the rights to Fox for the X-Men franchise.
Two different Scarlet Witches existed between the properties, precipitating an understanding they can't make references to things happening in movies from either studio.
A lot of this is a distant memory now after Elizabeth Olsen created a memorable version of Scarlet Witch, starting with The Winter Soldier in a cameo, then moving on to being a critical part of the Avengers team. It's in this version of the character where we see her become telekinetic and reading people's minds.
Last we saw of her was in Avengers: Endgame, though it's expected she'll also show up in the next Doctor Strange film in 2021.
Scarlet Witch's supreme power, coupled with great writing, could be a winning formula
Many Marvel fans note how powerful Scarlet Witch really is, as demonstrated in Endgame. There's a lot that can be done with her powers for the streaming show, not including showing the liabilities involved in always being able to move inanimate objects or read the minds of friends/enemies.
There has to be some weaknesses in Scarlet Witch, and we hope they'll explore them in the show. Considering the MCU version of Scarlet Witch didn't have a suit to wear, looking at her more human side will be better for the show in general amid the stunning special effects.
What sounds the most appealing is the push to add a little more comedy to the proceedings, something we're seeing gradually increase at Marvel. Comedic superheroes are still an untapped genre, possibly making WandaVision very popular alongside Loki if the latter goes the same route.