- October 29, 2019
Chance The Rapper was all over Saturday Night Live as both the host and musical guest last night (October 26). He appeared in nearly every skit of the night and gave two performances of "Zanies And Fools" and "Handsome," the latter featuring a surprise appearance from Megan The Stallion. It was his second time hosting and the show and we definitely hope that it won't be his last.
Chance's opening monologue started with him offering full support for the Chicago Teachers Union during their ongoing strike. Afterward, he did a song that paid homage to Chicago, his hometown. Somehow, Burger King, Luigi from the Super Mario franchise, and Percy Jackson & The Olympians series end up in the awesomely funny tune.
From there, Chance was central in a ton of skits. He was a psychotic host with a bloody toaster in "Tasty Toaster Tarts." While going through his pantry of snacks, his friends start to realize that something's seriously wrong. But once the toasted pastries come out, they don't seem to notice Chance's taped-up fridge.
In "Space Mistakes," Chance is a dad who gets getting called back to space where he works and is deathly afraid to "make a mistake." 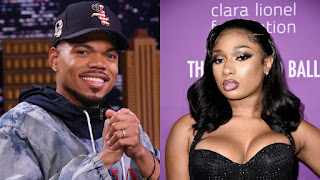 Of course, a "whoopsie" happens when one of his crew members forgets to put on a seatbelt and then another drops something while working outside of the ship. The short makes fun of movies like Ad Astra and Interstellar and the serious tone that comes with your workplace being outside of the atmosphere. Half of the hilarity comes from how over the top it is. If you watch these kinds of movies, you'll get a good laugh.
Chance introduced himself for his first performance of "Zanies And Fools," using an adorable cartoon short to give him time to sprint to the stage where an entire band was waiting on him. The drummers were front and center with gold glitter that misted into the air whenever they thwacked their instruments. Backup dancers also hopped on stage on both sides of him, bringing alien movements that made the already mystical performance even more ethereal.
For "Handsome," Jason Momoa gave Chance a shirtless introduction. The rapper was already on stage surrounded by mist and scrolling words on screens around him with people standing off on both sides in the distance. Megan Thee Stallion came out after the first verse was over, surprising the crowd. She spatA her words in the demanding tone that she always does and frolicked around the stage for the duration of the song, bowing with Chance after it was finished.
Check out clips from Chance's epic SNL show up above.