October 29, 2019
Stargirl, the Geoff Johns-helmed series developed for the DC Universe app, will reportedly head to The CW, where it will be modified somewhat to fit the standards and format of broadcast television. The rumor comes from Collider's Jeff Sneider, who tweeted it, noting that uncut episodes (likely for length rather than language or violence, since it is Stargirl after all) may make their way to HBO Max down the line. Such a claim will, depending on your perspective, probably either seem like yet another unsubstantiated claim to make the DC Universe service seem doomed -- or reinforce your feeling that the service is doomed.
Sneider discusses the issue on his The Sneider Cut podcast, which you can hear linked in the tweet below. The discussion of Stargirl happens around 40 minutes in.
Such rumors have been around since DC Universe launched, and have gone into high gear as the HBO Max launch gets ever closer. 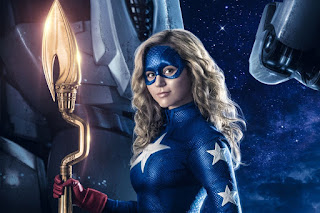