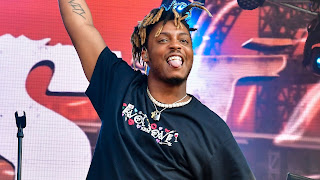 Juice WRLD's been hit with a huge lawsuit by pop-punk band Yellowcard, outlets are reporting, who claim that "Lucid Dreams," Juice WRLD's breakout 2018 single, copies melodic elements of their 2006 song "Holly Wood Died." The case is set to the tune of a whopping $15 million. Along with financial compensation, the band is looking for co-ownership of the song and royalties as well.
The Yellowcard members aren't just suing Juice WRLD; they're including nearly everyone connected with the record: producer Nicholas Mira, co-writer Taz Taylor, Interscope Records, and more. Since the song was instrumental in breaking Juice WRLD to mainstream America, they're also looking for revenue from his concert tours and public appearances. To establish the song's similarities, they point to a "melodic idiosyncrasy" called a melisma, which, according to the band, appears in a "parallel position" in both songs.
There's also the fact that Juice WRLD is quoted in an interview saying that he "listened to and educated himself in emo pop-rock music" to impress a girl that he had a crush on in fifth grade in 2006. It's the same year that "Holly Wood Dies" came out on Yellowcard's Lights and Sounds album.
According to Yellowcard's attorney, the lawsuit isn't new. "They put all of the parties on notice a long while ago and gave them every opportunity to try and resolve it," he said in a statement to Billboard. "That notice was pretty much ignored leaving them with no real choice."