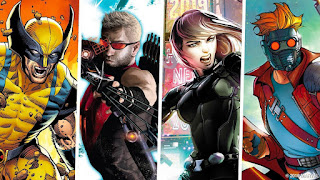 Marvel's Wolverine, Hawkeye, Black Widow and Star-Lord — and potentially more characters down the road — are getting their own podcasts on SiriusXM and Pandora.
SiriusXM and Marvel Entertainment announced a multiyear pact under which Marvel will create a "substantial amount" of exclusive podcasts for SiriusXM and Pandora, including both scripted and unscripted series and themed live events. The podcasts are set to debut in 2020. In addition, SiriusXM and Pandora will also debut many of Marvel's most popular podcasts before they can be heard anywhere else.
Included in Marvel's slate of upcoming programming are four new scripted series, each 10 episodes, based around Wolverine, Hawkeye, Black Widow and Star-Lord, as well as a fifth series in which all four team up. Unscripted podcasts will look at Marvel's history through a modern-day lens of pop culture, along with podcasts dedicated to popular Marvel franchises and regular talk shows.
"Powerful stories are read, seen, and heard – and we believe audio is the next natural step to bring the Marvel Universe to fans around the world," said Dan Buckley, president of Marvel Entertainment, in announcing the deal.
Starting next year, SiriusXM subscribers with streaming access can listen to all Marvel podcasts on the go with the SiriusXM mobile app and at home on connected devices including smart TVs, Amazon Alexa devices, Apple TV, Sony PlayStation, Roku players, and Sonos speakers. Users of Pandora — which SiriusXM acquired in a $3.5 billion deal — on both free ad-supported and premium subscription tiers will also be able to hear all Marvel podcasts on the Pandora mobile app for iOS and Android.
SiriusXM and Marvel launched their first joint initiative in August 2019 with an exclusive music station and channel called "Marvel's 80th: The Road to Marvel Comics #1000," which was available on SiriusXM for a limited run, as well as through its streaming platform and on the Pandora mobile app.