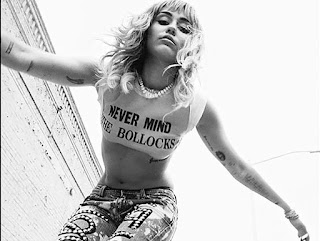 Miley Cyrus is coming... again. After kicking off her new era in May with She Is Coming, Cyrus said she would follow up with two more EPs that would ultimately comprise a full-length project titled She Is Miley Cyrus. But it appears the 26-year-old may be jumping straight to album mode, if her recent Instagram Live is any indication.
On Sunday (October 20), Cyrus took to IG to give fans a tour of her animal-filled L.A. abode, which included her home office. There, viewers got a look at a whiteboard with what appears to be a tracklist and a November 23 release date (which also happens to be MC's birthday). The 13-song list includes a smattering of tracks from She Is Coming â€" "Mother's Daughter," "Party Up The Street," and the RuPaul-assisted "Cattitude" â€" as well as the recent single "Slide Away." Interestingly, there may be a couple more collaborations on the docket â€" eagle-eyed fans noted that "Naked" appears to feature Cardi B, while Shawn Mendes may make an appearance on "Playing With Fire." Other notable titles, if this tracklist is legit, include "Golden G-String" and "Mary Jane."
In July, Cyrus spoke about the upcoming album in an interview with Elle, saying, "My record is called She Is Miley Cyrus. 'She' does not represent a gender. She is not just a woman. 'She' doesn't refer to a vagina. She is a force of nature. She is power. She can be anything you want to be, therefore, she is everything. She is the super she. She is the she-ro. She is the She-E-O."
Other highlights from Cyrus's livestream included a throwback rendition of her Bolt theme song "I Thought I Lost You" (which came at the request of Justin Bieber, who hopped onto the stream at one point), and the debut of a song called "Bad Karma." Singing a cappella, Cyrus belted, "They say it's bad karma being such a heartbreaker / I've always picked a giver 'cause I've always been a taker."
That wasn't the only unreleased tune Cyrus sang for fans. At another point in the nearly one-hour stream, she sat down at the piano and played a song she said she'd been working on that week. "Just think about me before filling up the cup / Feels like nowadays everybody's breaking up / But I wanna last, I wanna last / Baby just keep me from my past," she sang, noting that the song probably won't be on her album. She added that the melancholy tune was inspired by her sobriety; she revealed she's four months sober and added, "It's the best I've ever felt. ... It's my number one priority right now."
Peep the rumored MC7 tracklist below, and mark those calendars for November 23, in case Cyrus does decide to release this thing.
1. "Sagitarius"
2. "Motherâ€™s Daughter"
3. "Slide Away"
4. "Party Up The Street"
5. "American Dream"
6. "Naked" feat. Cardi B
7. "Golden G String"
8. "Mary Jane"
9. "Victoria"
10. "Cattitude"
11. "Bad Karma"
12. "Play With Fire" feat. Shawn Mendes