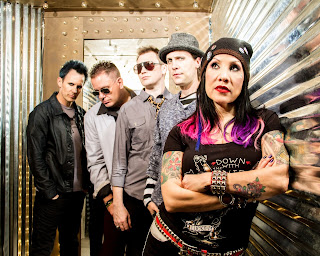 Performing with high energy, Indie pop rock band Rocket has boosted their morale to be acclaimed like groups such as Paramore & Social Distortion. They have been committed to their craft since their formation in 2013; being the voice against naysayers claiming that they don't fit in, Rocket continue to break down the stereotype with their single "Giants". When i first played this magical song I was instantly drawn in by the lyrics and energy of the vibe; I was immediately brought into the perspective by the lead singer of Rocket, Janelle Barreto, pushing the envelope forward by expressing and depicting the ruling of the stars above while fighting against the doubters.

The song speaks about holding on to hope giving revelation that it's time to shine in the sense of love.  This concept is feeding us motivation and strength to over come any battle.  Giants is a record that can be played on an everyday basis to uplift your spirits and make you think you can conquer the world with love. The sound behind the lyrics puts the song next to various soundtracks of movies from the 80's such as Wayne's World and High Times at Ridgemont High. It's definitely something that appeals to the youth and the lyrics are very pleasant to hear over and over again. Rocket has a bright future ahead of them and their fan base is going to grow even larger as long as they continue on the course on what they have presented here. If i had to rate Rocket on a scale of 1 to 10, it will be a 8 for energy, the message comprised in beautiful lyrics, togetherness and awesome instrumentation.