LEGO has unveiled a new Batmobile set based on Tim Burton's 1989 Batman. The truly massive set is the largest Batmobile that the toy-maker has ever revealed and it's going to be here just in time for the holiday season. LEGO will release the 3,300 piece behemoth as part of its Black Friday 2019 product lineup on November 29. But fans of the Caped Crusader will have to shell out a pretty penny to get their hands on this latest set.
As revealed by LEGO, the 1989 Batmobile set will retail for $249.99. The set comes with 3,306 pieces. Amongst those pieces are some key accessories that fans of the movie will appreciate. Three minifigures, Batman, Vicki Vale and Joker, will be included. To hype up the release, LEGO revealed a promotional video that showcases many of the features and details that have been included in the highly-detailed set. The company provided the following description.
"This LEGO brick version of the 1989 Batmobile features a slide-open cockpit with a new-fo r-November-2019 wraparound windshield element, 2 minifigure seats, a steering wheel, stick shift and dashboard stickers, 2 hidden, non-shooting machine guns under the bonnet with a pop-up function activated by rotating the turbine exhaust, 2 decorative grappling hooks, wheel trims with the Bat logo 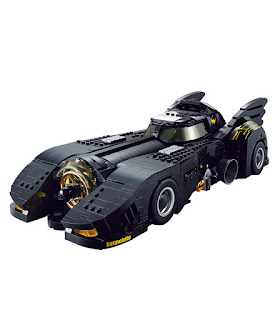 and specially designed tyres for the front wheels, batwings and other iconic design details."
Additionally, the set comes with a rotating display stand, that also comes with an information plate. As far as weapons go, Batman will come with his Batarang and Joker will have his gun. Batman will also have a movie-accurate cape and Vickie Vale will have a camera. Once it's built, the Batmobile measures 4 inches high, 23 inches long and 8 inches wide. And it will make a nice companion piece to the 80th Anniversary Lego Batcave.
While LEGO has traditionally been a toy line aimed at children, the company has increasingly entered the adult-focused collector and model building market. This is a prime example of something that is firmly aimed at the adult crowd, given the hefty price tag, as well as the skill level associated with assembling the set. That strategy has proved successful for LEGO as they've released a wide variety of collector's sets based on iconic franchises, which also extends to Marvel, Star Wars and Jurassic Park, amongst others.

Related: Jeffrey Wright Confirmed as Commissioner Gordon in The Batman
Tim Burton's Batman proved to be a defining moment in the history of Batman movies, but all superhero movies. With Michael Keaton as the titular DC Comics hero and Jack Nicholson as Joker, the movie proved to be a smash success, bringing in $411 million worldwide, working from a relatively tiny $35 million budget. Burton and Keaton returned for the 1992 sequel, Batman Returns. While it was eleven years before X-Men hit theaters and more or less ushered in the modern era of comic book movies, the importance of Burton's Batman cannot be overstated. Those interested in getting their hands on this set when it hits shelves can head on over to LEGO.com.