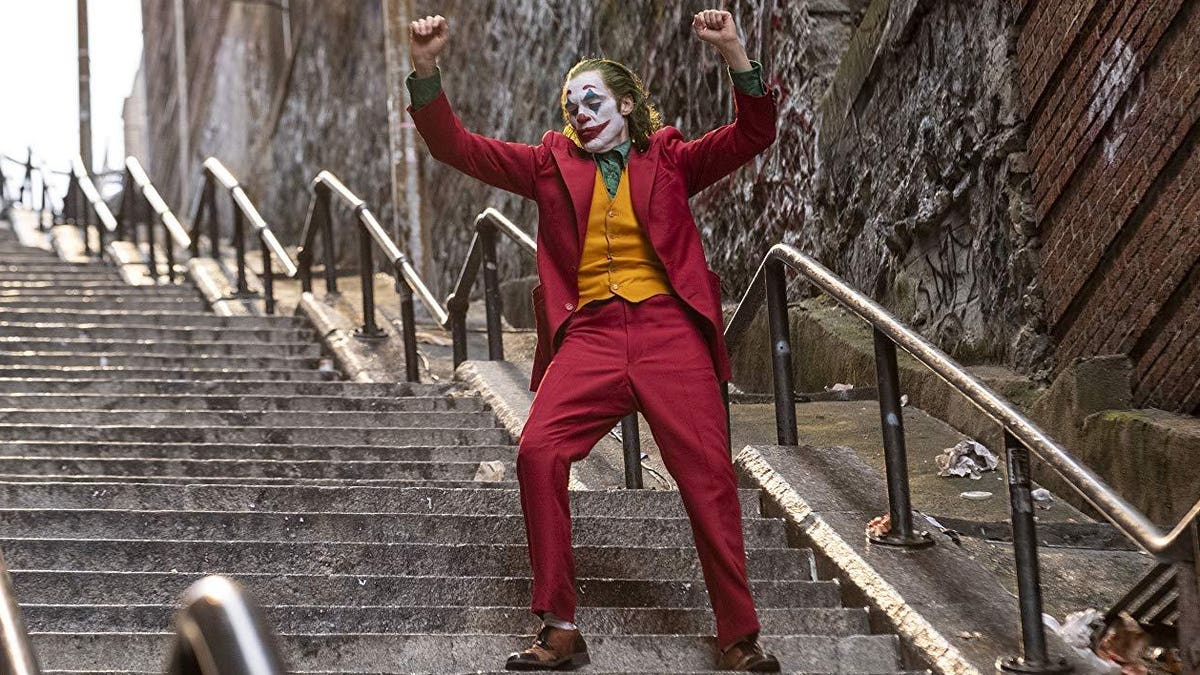 Joker earned $1.615 million on Wednesday, down just 34% from its previous Wednesday. That gives it a 27-day domestic cume of $283.784 million as it approaches the end of its first month in theaters. And since it opened overseas on Wednesday the 2nd, its month-long total is now (presuming a continued 32.6/67.4 domestic/overseas split) $870.5 million worldwide.
So, barring a fluke, itâ€™ll pass the $873 million global cume of Batman v Superman: Dawn of Justice sometime today. At which point, it will be the fourth-biggest DC Comics flick ever behind The Dark Knight ($1.004 billion in 2008), The Dark Knight Rises ($1.081 billion in 2012) and Aquaman ($1.155 billion in 2018). Aquamanâ€™s sans-China global cume was â€œonlyâ€ $857 million.
Once it passes the $880 million cume of Spider-Man: Homecoming and the $890 million cume of Spider-Man 3 (in 2007), itâ€™ll be the eighth-biggest â€œsoloâ€ comic book movie of all time, behind only The Dark Knight, The Dark Knight Rises, Captain Marvel ($1.128 billion), Spider-Man: Far from Home ($1.131 billion), Aquaman, Iron Man 3 ($1.215 billion) and Black Panther ($1.346 billion). If it tops $975 million worldwide in the end, itâ€™ll have earned more than three of those (Spider-Man 2, Captain Marvel and Aquaman) without their respective China grosses.
Once it passes $952 million, itâ€™ll top The Mask ($350 million on a $23 million budget in 1994) as the most profitable comic book movie ever. Itâ€™s worth noting that Warner Bros. spent the month of September dealing with a deluge of blog posts and articles that speculated, with furrowed brows, that the Joaquin Phoenix flick would inspire real-life violence.
Whether it was a shooting in a theater (James Holmes was not intentionally dressed as the Joker when he attacked a movie theater showing The Dark Knight Rises in July of 2012), a copycat act of violence (Klebold and Harris werenâ€™t remotely mimicking The Matrix when they attacked Columbine High School in April of 1999) or a glorified incel rebellion, Joker was viewed as a lit match on the spilled gasoline that is our modern culture. However, like the panic over Y2K, absolutely nothing happened.
Truthfully, I was concerned that the media attention would be the thing that spurred violence, since it positioned the movie as exactly the thing that would get the latest mass shooter noticeably more attention than the last mass shooter. However, in a manner not unlike the finale of The Dark Knight, moviegoers saw the movie, enjoyed (or disliked) the movie and went on with their lives. There were a few obnoxious moviegoers and even a fake threat or two in the initial days of the filmâ€™s run, but otherwise, there was about as much real-life carnage inspired by Joker as we saw with Hustlers and Gemini Man.
Sure, itâ€™s possible that a moviegoer or three watched the film and perhaps took the wrong message to be applied later. But the real-world reaction has been confined to anti-government protesters wearing clown/Joker masks or makeup during demonstrations in Hong Kong and elsewhere. Oh, and folks are visiting one of the filmâ€™s exterior locations, a staircase in the Bronx, for the sake of photos and blog posts. We were promised chaos, but instead we got tourism.
Thatâ€™s obviously a good thing, but it again shows that many of these media debates and Twitter fights exist within the bubble.
Certain online fans and critics hated the Game of Thrones finale, but general audiences either liked it or at least didnâ€™t hate it while the show won a Best Drama Emmy. The folks on YouTube who swear that The Last Jedi ruined Star Wars or that Captain Marvel is the death of Marvel are about as indicative of the general populace as the would-be social justice warrior types who decried Bohemian Rhapsody and Green Book. Even Peter Rabbit quadrupled its $25 million debut despite controversy about Peter using a food allergy against a (human) enemy.
Maybe audiences are better at that â€œdepiction doesnâ€™t equal endorsementâ€ thing than we give them credit for. Maybe they can watch La La Land and follow the plot while hearing enough of John Legendâ€™s dialogue to not think itâ€™s about white people saving jazz. Maybe they can watch Green Book and not come away from it thinking that racism no longer exists. Maybe the same folks who might have taken the wrong message from Joker are the same folks who would view American History X as a movie about a super-cool neo-Nazi because thatâ€™s just how they are. Maybe Joker really was just a movie.
Meanwhile, while admittedly not an apples-to-apples comparison, Iâ€™m really looking forward to eventually seeing Blumhouseâ€™s The Hunt.