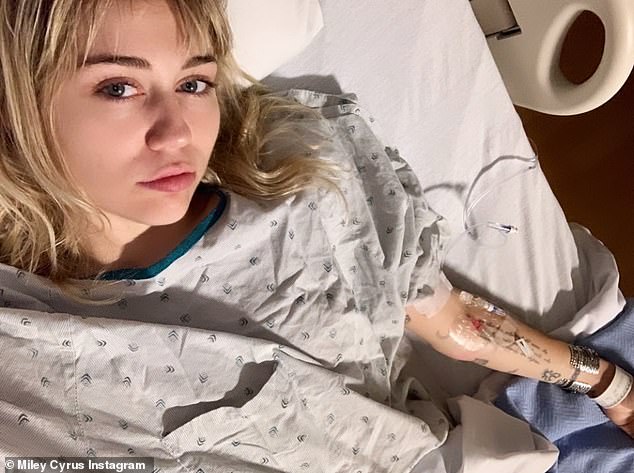 Silence is golden right now for Miley Cyrus.
The singer who was recently hospitalized for tonsillitis, found herself checking back in for another procedure: vocal cord surgery.
People reports that while treating Miley's previous malady, doctors found another issue with her vocal cords that needed urgent attention. Apparently, this particular issue had gone unnoticed (and therefore untreated) over several years. Now that it's been spotted, Miley needs to make sure she keeps her pipes out of commission so that they can recover.
As a result, she's pushed her plans to record new music and continue performing until early 2020. In late October, Miley took to her Instagram Story to post a snap of herself exercising, with the caption "On vocal rest not body."
Miley's new boyfriend Cody Simpson has been by her side throughout it all, so at least she's hardly going through this recovery period alone.
Cyrus released her latest EP, She Is Coming, in June. The six-song release is meant to be a part of her collective LP She Is Miley Cyrus, with two additional EPs on their way. She Is Here and She Is Everything have yet to be dated for release. With Miley stepping back for a bit to focus on recovery, those two EPs may take a bit longer than originally expected. Meanwhile, She Is Miley Cyrus has yet to be dated as well.
Following her split from ex-husband Liam Hemsworth, Miley released a new song in the form of "Slide Away," an anthemic track that appeared to reference her past relationship and its struggles. The singer has yet to speak on anything concrete related to any new music on its way out, but if it's anything like "Slide Away" or She Is Coming, we're excited to hear more as we ring in the new year.