Inside The Real-Life Fairy Tales That Fueled Frozen 2

December 02, 2019
Itâ€™s easy to be mesmerized by a good fairy tale, with their heroes thrust into savior mode, tapping unknown powers to overcome the unimaginable. Add that to their enchanted lands where transformation is inevitable, stocked with insurmountable demons that our heroes, against all odds, always find a way to surmount. And of course, the best part of all: Regardless of how bleak things get, thereâ€™s always comfort in knowing a happily ever after is on the way.
At a certain age, however, we all come to the painful realization that all those fairy tales we loved growing up are just that: tales. But that doesn't mean they're not based in some element of truth, no matter how fantastical the journey. After all, fairy tales are made by people, and people tend to create things that are based on lived experiences.
For example, Frozen 2's heroines Elsa and Anna may not have actually restored harmony in an enchanted forest, but the creative team who brought the animated film to life have imbued the Disney fairy tale with their own experiences â€" personal, lived-in touches that make the film feel even more real, despite the magic. MTV News talks to the filmmakers about the real-life fairy tales that fueled the box office giant.
Tapping Unknown Powers
Every fairy tale begins with our hero realizing their powers. In Frozen 2, thatâ€™s the moment when Elsa feels her ice queen powers getting increasingly stronger, and then she hears a soft, distant melody calling for her to leave Arendelle in search of something greater.
For the filmâ€™s songwriter Robert Lopez, those calls came early in life. Heavily pushed by his non-musical parents to take up the piano, Lopez looks back at one of his earliest lessons, when he was just 6 or 7 years old, and his teacher instructed him to compose something. â€œI was like, â€˜Me? You want me to write the notes on the paper?â€™ I remember just thinking, â€˜Kids can't do that,â€™â€ he tells MTV News. â€œBut kids can apparently, especially when they're encouraged by a teacher.â€ He returned the next week and performed what he now considers his first musical theater number, a little ditty that he can still play to this day: â€œOy vey, what a day / The crops have not been fed / Oy vey, what a day / Itâ€™s already time for bed.â€
Of course, your destiny isnâ€™t always going to be such a quick shoulder-tap. Songwriter Kristen Anderson-Lopez didnâ€™t realize that becoming a lyricist was even an option until she had already graduated college. After years of drab roles onstage, Anderson-Lopez had her â€œInto the Unknownâ€ moment: â€œThere's this voice saying, â€˜This isn't what you're supposed to do,â€™â€ she recalls. â€œFinally, I started writing some material for a cabaret and then one of the guys who helped me write that said, â€˜Youâ€™re a lyricist.â€™â€ So, she applied for the BMI Lehman Engel Musical Theatre Workshop and embarked on what would become her Oscar-winning journey.
Kristen Anderson-Lopez and Robert Lopez after winning their second Oscars in 2018.
Battling Obstacles 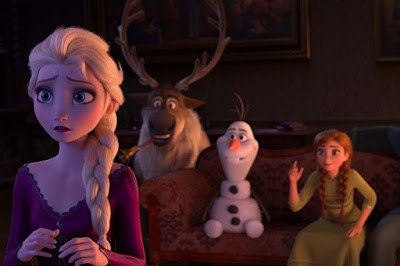 Realizing your path is one thing; stepping foot inside the enchanted forest is a whole different ball game. Having already come to terms with the fact that you are, in fact, heading into the unknown, itâ€™s time to brace yourself for the obstacles to come. Whether itâ€™s using ice powers to combat the fire spirit or Kristoff learning that Anna had slipped off without him while he was planning the perfect proposal, weâ€™re all bound to get a little, ahem, â€œLost in the Woods.â€
There may not be literal earth giants threatening to squash us in the real world, but each of Frozen 2â€™s creators faced stomach-dropping obstacles, be that the classic outsider tale of a loner artist, like co-director Chris Buck, or combatting immense self-doubt, as was the case for co-director Jennifer Lee. â€œYou often wait to be tapped, for someone to tell you, â€˜You have something. Go ahead and do that,â€™â€ she said. â€œAnd if no one does, you don't think you have it. You don't realize often that you have to fight for that, and that you don't always start out with the answers or showing that skill, even. That it's the want that should drive you.â€œ
Real-world villains also exist. Anderson-Lopez will never forget the time a producer agreed to meet with her, only to tell her that women are unreliable investments; sheâ€™ll be excited about writing music for a few years, and then sheâ€™ll get bored and move onto something else, he asserted. â€œI was so excited for this meeting because he had produced something that I loved growing up, and to be dismissed in that way made me feel so small,â€ Anderson-Lopez says.
Chris Buck, Jennifer Lee, and Peter Del Vecho beaming at the Frozen 2 premiere in London.
Embracing Change
Baddies be damned, our heroes persisted. And just as Anna had to overcome her dependence on others after Elsaâ€™s powers waned and Olaf lost his permafrost, they dug deeper within themselves to face their challenges.
Lee pushed forward until the age of 30, when she finally decided to leave the world of book publishing and take the plunge into film school. Having learned of the world of possibilities after leaving her small state of Rhode Island for the cultural mecca of New York City, Lee realized that she was happiest when she was exercising her creativity. Heading into the program, she remembers thinking to herself, â€œIf I only get to make films for four years, they'll probably be the greatest creative things of my life. So it's worth doing.â€ Lee had no idea she would one day go on to become chief creative officer of Walt Disney Animation Studios; she was just trying to do â€œThe Next Right Thing.â€
And that change isnâ€™t a one-and-done situation. Lopez looks back on making 2013â€™s Frozen as one of his major transformations, and by then, heâ€™d already had one Grammy, two Emmys, and three Tonys decorating his shelves. Working on the film forced him to confront the unconscious bias heâ€™d been harboring all those years: that women arenâ€™t leaders. â€œI thought that I had to be strong for us and to be the expert,â€ he says, noting the sheer relief he felt when Lee and Anderson-Lopez (his own wife) shattered his self-imposed expectations by flourishing in their positions of power â€" not unlike Elsa and Anna did on their own journey. â€œThe amount of resonance that the piece has had because of these two women is...â€ he pauses. â€œThat's Frozen. That's this phenomenon.â€
The Frozen 2 cast and filmmakers at the film's World Premiere in Hollywood.
Happily Ever After
After the adventure of the journey comes the ultimate payoff: the big â€œShow Yourselfâ€ moment, when heroes can be who they are, completely.
Producer Peter Del Vechoâ€™s happily ever after came when he started working at Disney and, for the first time, truly felt like he found his people. For him, a good tale isnâ€™t dependent upon the story â€" itâ€™s the characters moving the story along. And just as Frozen 2 wouldnâ€™t be the same without Elsa, Anna, Olaf, Kristoff, and Sven all doing their parts, neither would the fairy tale heâ€™s living if he hadnâ€™t made his way to the animation studio. â€œYou get the right team together and you can do amazing work,â€ Del Vecho says.
And, Anderson-Lopez adds, just like Elsa and Anna had one happily ever after together and another apart, real-life fairy tales donâ€™t end after the first set of credits roll. â€œAs soon as you find your happily ever after, you realize, â€˜Oh shit, I'm still in the story,â€™â€ she says. The happily ever afters never stop coming; not when you meet your partner, not when you have children, not even when you win an Oscar or become an EGOT â€" twice!
â€œIt's all about staying in [a] growth mindset,â€ Anderson-Lopez says. And as long as youâ€™re growing, your own fairy tale awaits.