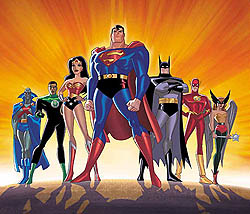 When DC Comics launched their streaming service, DC Universe, one of the initial lures was exclusive toys. DC Collectibles had a hit on its hands with 6-inch scaled figures from Batman: The Animated Series, so why not Justice League next? As an added bonus, Justice League features DC's most recognizable superheroes. So even casual subscribers who don't care about the cartoon might still find an exclusive Superman or Wonder Woman appealing.
The Justice League action figures could only be ordered through the app, and they got a staggered release, in order to hook initial subscribers for at least three months. While not cheap, at $28 with no accessories, the figures are nonetheless top quality. With flesh-toned plastic rather than paint, and different reflectiveness levels for skin and clothing, they did their namesakes…justice.
But with DC Universe floundering as a streaming service ever since Warner Bros. announced their own that will share its content, DC clearly wanted another venue to sell the figures. And via BigBadToyStore this morning, news broke that all eight will be available again next August, to the general public. Preorders are open now, with the figures going for $4 less than they did initially.
Reminisce about the good old days when we could all unite for one Justice League show everybody liked. And discourse did not center on whether or not a certain director's cut existed. DC might never release that — but releasing the DC Collectibles figures is a move every fan can get behind.