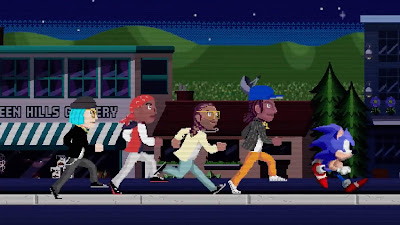 Lo and behold, possibly the fastest posse cut in rap history! Wiz Khalifa, Lil Yachty, Ty Dolla $ign, and Sueco the Child have rapidly released a new collaboration, "Speed Me Up," that's set to appear on the soundtrack to the forthcoming Sonic the Hedgehog movie.
It comes with a video about digitally dashing through reality and the land of the iconic video game franchise, giving fans glimpses of not only what these four artists' digital avatars would look like if they too could collect heavy gold rings that float in mid air, but also key scenes from the movie involving Sonic himself and the evil Dr. Robotnik (played by Jim Carrey, who looks like he's having a blast).
What would you do if you were sucked into a Sonic video game? They're extremely difficult with giant, looping hills, flying robots, and other obstacles that would make life there as a human a living hell. Wiz, Yachty, Ty, and Sueco face this reality as they get digitized into Sonic's world and chase him as he goes through some of the movie's situations, from excelling at darts in a bar to facing off against Eggman. The cheery song finds the rappers exploring their fast-paced lives that they live while their digital characters speed just as quickly. They make it out alive though, ending up on a couch where they all get to play Sonic together.
Sonic the Hedgehog will be out on Valentine's Day (February 14). Last year, the lovable Sega mascot had its design revamped for the movie after it was criticized following a trailer that dropped in April.
Check out Wiz Khalifa, Lil Yachty, Ty Dolla $ign, and Sueco the Child's digital Sonic speed-runners in "Speed Me Up" above.