The Batman: Colin Farrell Says Penguin's Look Not Finalized Yet 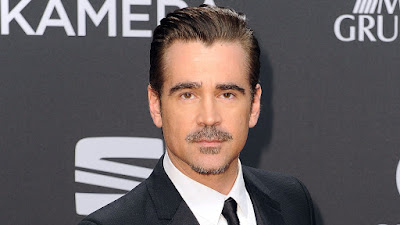 Colin Farrell also appeared on Jimmy Kimmel Live this week, during which time he said of his role as the Penguin in The Batman that "we are still in the process of just finishing the design, the aesthetic of the character."Farrell said he begins filming three weeks -- he had told Ellen DeGeneres in the story below that he begins filming in two weeks -- and praised filmmaker Matt Reeves' screenplay for The Batman, deeming it "a really, really beautiful, dark, moving script, really gorgeous."
Our original report from Jan. 22nd follows.
The internet was abuzz recently when photos of Colin Farrell sporting silvery grey hair surfaced online, leading many to suspect that's what Farrell might look like as the Penguin in The Batman. As it turns out, Farrell hasn't even started filming The Batman yet and has already dyed his hair dark since those paparazzi photos went viral.
Farrell appeared on Ellen on Wednesday where he said he recently finished filming a BBC movie in the Arctic, which is reportedly called The North Water. He explained the silvery hair was simply him trying out a new hair color after wrapping the BBC film and that he'd gone through a few other colors before dyeing his hair back to its normal dark color after those photos came out.
It appears Farrell gained weight for the BBC film, judging by the personal videos he showed DeGeneres from the set.
The Batman Cast: Every Actor and Character
Farrell revealed that he's headed to London in two weeks to start filming The Batman. He referred to his role as "Oz Cobblepot, I'm playing a character known as the Penguin."
We can assume that wasn't Farrell simply shortening Oswald Cobblepot's name as director Matt Reeves recently tweeted Farrell's casting with the hashtag #Oz so it appears that's how the iconic DC Comics supervillain will be referred to in the movie.
Colin Farrell's latest film, The Gentlemen, opens in North America this weekend. We weren't fans, saying in our Gentlemen review that "there's no high to be found from this new Guy Ritchie joint."