Voice of Addiction - The Lost Art of Empathy #FlyahReview 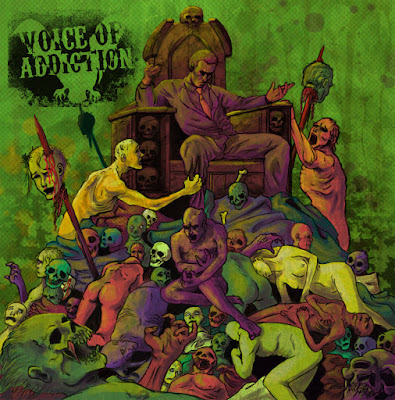 Voice of Addiction are an up and coming political Punk Rock group hailing from Chicago, Illinois. Over the years, they have toured over thousands of shows and have sold over 8,000 physical copies of music. This group brings out an element of aggression yet socially they convey a message to be widespread for the people. When first hearing their album, "The Lost Art of Empathy", I felt as the vibe of an outlaw not being trusted among the powers that be. The artwork on the album illustrates one man at the top and the people being like zombies to reach him, which is the tale of the struggle in the United States and other political injustice driven countries. This feeling was first nurtured in the opening song, "Rustbelt". The song reminds me of the soundtrack we used to hear on Tony Hawk's Pro Skater because of the reputation of skateboarders associated as lawbreakers.

The lyric, "Raised in the steel towns... and nothing ever seems to go our way" is a sense of pride and an unfairness for Americans who have built this country. This could be a theme song for a protest of lobbyists angry at the amendments that are passed. The second song entitled "Dead by Dawn" is a song of transformation with details of how everyday something changes your point of view. I can relate to this concept because some days I believe I'm doing right and as soon the next day comes, it seems I'm doing wrong. It presents a message that we need to get our conscious and subconscious minds in order. Also, we can be easily influenced by the trails of events which means we have to work on our reaction.

Another good song that i like on the album is "Lockwood", which was a tribute to a fellow friend that passed away which was also a heavy hitter in the Detroit punk scene. The energy told the story of how they enjoyed good times and risen above it all making a legacy leading to the lyric "Punk heroes never die". Sometimes we as humans get attached to someone close and the only thing we can do is to nurture our relationships and love one another while we're still here on Earth. My favorite song on this thrilling project is "I Can't Breathe" which is a metaphorical tune of how people are not aware of circumstances that the powers that be are dealing us. It also tells the story of how we're not secure in our day to day situations but some are privileged; the line "Only first class have safety belts" depicts the tale of the rich vs. poor and a common political issue in today's time.

If i had to rate "The Lost Art of Empathy" album performed by Voice of Addiction on a scale of 1 to 10, the result will be a 10 for its impactful lyrics performance in instrumentation conveying a strong message showing determination grit and perseverance and above all being entertaining.

You can check out their album or buy their CD on Bandcamp or on their website which is listed below: