Aladdin 2: 5 Major Questions We Have About The Live-Action Disney Sequel


Ready to enter a whole new worldâ€¦ again, in Aladdin 2? Thatâ€™s right. Disney has announced that a sequel to the live action Aladdin is officially in the works.
There is no question as to how the 2019 update of their 1992 Oscar-winning animated classic, starring Will Smith as the Genie, Mena Massoud in the title role, and Naomi Scott as Princess Jasmine, got the green light after it surpassed Disneyâ€™s favorite B-word in its global box office earnings. However, Aladdin 2 does bring several questions to mind.
As of now, we only know so much about this forthcoming sequel, but what sort of things are we still scratching our heads about. I present five of our most pressing questions regarding Aladdin 2.
WARNING: The following article contains spoilers of both the 1992 and 2019 versions of Aladdin**. We recommend you watch both of them before you proceed.**
Is Will Smith Returning As The Genie?
No one can dispute the belief that Robin Williamsâ€™ performance as the Genie in the original Aladdin is irreplaceable. Will Smith clearly agreed, steering clear of imitating the late, fast-talking comedian and, instead making his take on Aladdinâ€™s friendly wish granter something of his own. So, will we see more of Big (Blue) Willie in Aladdin 2? 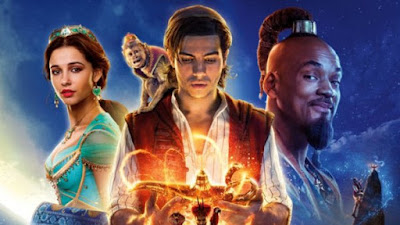 It is easy to imagine why Will Smith would be game to reprise his role from the most profitable film of his career, although it is not likely it would be the same enchanted, rapping character as before, considering Aladdinâ€™s final wish was to make Genie his own, free human being. Not to mention, I would not mind seeing more adventures of Smithâ€™s travels by boat, joined by wife, Princess Jasmineâ€™s former servant, Dalia (Nasim Pedrad), and children. Of course, while the script is still in development, the Bad Boys For Life star has yet to be officially approached to make a return, so only time will tell if this wish is destined to come true.
Is Aladdin 2 Going To Be Another Musical?
In addition to Robin Williamsâ€™ incomparable voice acting as Genie and its exciting adventure themes, what keeps fans coming back to Aladdin is the music. Alan Menken won two Academy Awards in 1993 for his score of the film and for co-writing the original song â€œA Whole New Worldâ€ with Tim Rice, which was reused for the live action remake, with the addition of a new song specially written for Naomi Scott to sing as Princess Jasmine. Is Alan Menken ready for more â€œArabian Nightsâ€ writing music for Aladdin 2?
Of the many things we are still in the dark about regarding this follow-up, the chance of it being a musical is one of them, with no confirmation that Alan Menken, or another composer or songwriting team familiar to the Disney lexicon, is set to churn out more catchy show tunes for DJ Khaled to remix. It is hard to imagine an Aladdin movie without singing and dancing, so expecting a musical is a safer bet than the contrary. If that is to be the case, however, should we expect another return from a notable person behind the camera?
Is Guy Ritchie Returning To Direct Aladdin 2?
In January 2020, Guy Ritchie returned to his gritty, British crime comedy roots with The Gentlemen after years of directing big budget period dramas, including two hit Sherlock Holmes movies, an adaptation of the 1960s spy TV series The Man from U.N.C.L.E., and a much forgotten King Arthur movie. The last, and most successful, of this bizarre era in his career was the live-action Aladdin update, which was also the directorâ€™s first musical. Will it also be his last or will we see his name in the credits for Aladdin 2?
It is uncertain at the moment if Aladdin 2 will be helmed Guy Ritchie, who is currently working on his next feature, Cash Truck, which is set for a January 2021 release and stars his frequent collaborator Jason Statham. No word on if that film, a remake of a French heist drama, will be a musical either.
Will Mena Massoud, Naomi Scott, And Other Aladdin Cast Members Return?
The Aladdin remake marked a refreshing turning point for a big budget adventure story by casting performers whose cultural backgrounds matched their characters, not to mention their performances were widely praised, especially Naomi Scottâ€™s empowering reinvention of Princess Jasmine. Should we expect the Charlieâ€™s Angels actress to star alongside Mena Massoud, Nasim Pedrad and her other cast members again for Aladdin 2?
THR reports that, according to Disney reps, yes, it should be expected that Mena Massoud, Naomi Scott, and even Will Smith will return, but, with the script still in its early stages, no offers have been made to the actors at this time. One actor from the cast of the 2019 Aladdin remake whom I would especially keep an eye out for is Marwan Kenzari, who played power-hungry tyrant Jafar, because if he returns, that might be a hint as to what the sequel will be about.
Will Aladdin 2 Take Inspiration From The Animated Sequels?
The announcement of Aladdin 2 getting the green light special has reminded fans that the original animated Aladdin actually spawned two straight-to-video sequels itself. The first of which, The Return of Jafar, sees the revived titular villain plot revenge against Aladdin as he prepares to inherit the throne of Agrabah, followed by the third installment, Aladdin and the King of Thieves, in which Aladdin and Jasmineâ€™s wedding is interrupted by a mysterious figure from his past. Would Disney really go so far as to make a sequel to a remake a remake of a sequel?
According to Variety, the sequel will be a fresh new take on the continuing adventures of Aladdin, which writers John Gatins and Andrea Berloff are reportedly looking at One Thousand and One Nights, the collection of Middle Eastern folk tales that inspired the original film, for inspiration. Whether or not the writers may still borrow a few elements from the animated sequels for Aladdin 2 (such as seeing Marwan Kenzari return as an enraged Jafar or Aladdin reunited with his long lost father) is to be determined.
We know that you are dying to know more about Aladdin 2 right this minute. Well, we cannot grant that wish immediately. However, until Disneyâ€™s live action sequel hits theaters, be sure to check back for more updates here on CinemaBlend.