Disney Finally Revealed Its Adorable Baby Yoda Stuffed Animal, And Of Course It's Sold Out 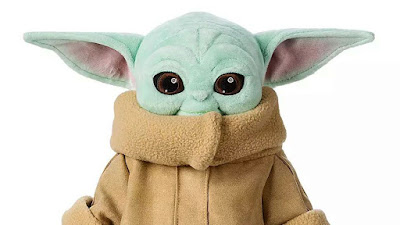 When it comes to peopleâ€™s interest in a Baby Yoda stuffed animal, the Force is strong! Disney has finally unveiled the adorable stuffed animal of your Star Wars dreams, which is excellent news. The bad news is that finally getting to hold your very own official Baby Yoda just took a substantial twist. It is already sold out.
ShopDisney has posted â€œThe Childâ€ (aka Baby Yoda) in all of his 11-inch glory for one cent shy of $25! Unfortunately, moving your cursor over to pre-order The Mandalorian merchandise will reveal the dreaded sight of a greyed-out button with the disturbing words: â€œsold out.â€ No! What is it they say about good things coming to those who wait? Fans who managed to pre-order already have to wait until April 20, 2020 to receive their toys, since that is the date Disney lists under the shipping and delivery section. But how long is the wait for Team "Save for Later"?
The thing is, fans have already been waiting for a long time! After The Mandalorianâ€™s first wave of merchandise hit, there was one prominent figure missing â€" Baby Yoda. Disneyâ€™s bold move meant reportedly missing out on quite a bit of profit over a significant period -- the holidays! Now, fans who have waited all this time have hit yet another roadblock to having their own official Baby Yoda.
Sold out? The demand for a plush Baby Yoda has undoubtedly been high. Fans love (emphasis on love) him. So you would have thought Disney would have ordered up quite a few. Apparently, even Disney cannot keep up with the overwhelming desire for a plush Baby Yoda. The Mandalorianâ€™s breakout character has had an inspiring past few months.
Baby Yodaâ€™s stardom has been compared to that of Leonardo DiCaprio by Disneyâ€™s CEO. So, you know, he is pretty famous at this point. Of course, Disneyâ€™s CEO has also admitted that Baby Yodaâ€™s popularity has surprised even him. Now to the question everyone probably wants to know.
Will you be able to have a plush Baby Yoda by the time The Mandalorianâ€™s second season arrives? It is currently set to hit the small screen this coming fall. You have to hope that Disney will have stocked up on its Baby Yoda stuffed animal merch by then.
When The Mandalorian Season 2 premieres, it will have been around a year since the first season arrived. Is that not enough time for Baby Yoda to make his way to fans in plush form? I would certainly hope so! Disney has certainly delivered with the Baby Yoda stuffed animal. He is super adorable and cuddly! Are meme-worthy moments included?
I can only imagine how much fun the internet is going to have once Baby Yoda makes his way into homes. You can watch Baby Yoda in the first season of The Mandalorian streaming on Disney+. Baby Yodaâ€™s adventures will continue in Season 2, which is set to arrive in fall 2020, aka well after this winter and springâ€™s premieres.