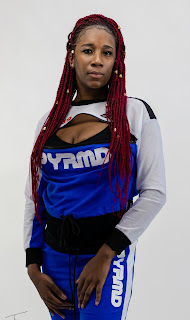 Keish Strong is one of the most refreshingly entertaining female artist since Eve(Ruff Ryders Ent.) She is a Hip Hop artist from Detroit, MI. Her style is very enjoyable, yet at times, serious as life itself. She has received over 10000 views on Soundcloud. Keish Strong has been featured in publications and ezines like Hype Off Life & Real Rap. She has features coming in the months of March and April in Coast 2 Coast, The Grynd Report, Hype Magazine and others we will inform you on when they are finalized. Keish Strong began writing poems very young as a means of expression and escape from a very traumatic childhood. She began rapping in High School about age 16 or 17. She uses her very poor upbringing as a driving force to keep her motivated. She is determined to provide a better life for herself and give her children the childhood she never enjoyed. Her music is a reflection of her no nonsense attitude, as well as her fun side. She's an incredible humanitarian, advocate for women empowerment and an even greater spirit and artist.

Keish Strong steps in the game with an old school flavor. When I say flavor, I mean it might be 31 flavors like Ben & Jerry's according to her single, "The Ice Cream Party". Her performance on the song is energetic and the lyrics are metaphorically connected depicting her sweet tooth for romance. Although the production of the instrumental is a little unmixed, the song is still fun and entertaining. I think Keish Strong has a style that is very appealing and reminds me of hip hop groups such as Crime Mob or the famous hip hop artist La Chat.

On her second single, Keish Strong really displays her lyrical content by expressing so many reasons why a person would hate on her style image and persona. The song is entitled "Why You Mad" which is a self-answering question and Keish goes into detail on why she's the best in the game with so many haters. Proceeding with the third single "Hands Up, Keish gets the party started with another crowd pleasing anthem. The song reminds of Doug E Fresh's hit song "The Show" where he entertains the crowd with a little bit of participation. The beat on this one was definitely different and I really like the crowd sound in the background.

What could you say more about Keish Strong? Her style is original; her energy is flawless and above all she never loses confidence. In an industry predominately controlled by male hip hop artists, there are also should be room for female hip hop artists to shine in the same space as the men. If I had to rate Keish Strong on a scale of 1 to 10, the score I will give would be 7 for charisma performance and creativity.