Stargirl Explained: Who Is the CW/DC Universe Superhero? 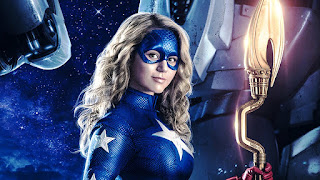 A new teenage heroine is coming to the small screen, and we can't wait to see her in action! Stargirl makes her debut this spring on DC Universe and The CW. The title character, also known as Courtney Whitmore, will be played by Brec Bassinger, and if the latest trailer is any indication, she's going to bring the same rebellious attitude and fresh look at the world of superheroes as the original incarnation of the character in the comics.
Just who is Stargirl? And what is that staff she proudly carries? Let's learn more about the DC Comics character and her ties to the storied Justice Society of America to get an idea of what adventures might await the newest superhero to shine on the small screen. These are the topics we'll be covering here:

Who Is Stargirl? Beneath the mask, Stargirl is Courtney Whitmore, a run-of-the-mill high school sophomore who would go from small-town hero to stalwart member of the Justice Society of America over her years of comic book adventures. Although she started her superhero career as the Star-Spangled Kid, in time Starman would pass on his Cosmic Staff to her, and she proudly took the name Stargirl.
Courtney was created in 1999 by Geoff Johns and Lee Moder in honor of Johns' real-life sister, who passed away in a plane crash in 1996. They even share the same name.
Stargirl is Courtney Whitmore, a run-of-the-mill high school sophomore who would go from small-town hero to stalwart member of the Justice Society of America. How Did Stargirl Get Her Powers? When we first met Courtney in Stars and S.T.R.I.P.E. #0 and #1 (July and August 1999), she was going through some very normal, non-superpowered problems: Her mother remarried a kind man named Pat Dugan, and the family moved to a small town in Nebraska. While she never really knew her father, Courtney wasn't hot on the idea of a new stepfather, and remained sullen and distant from him.
After the big move, Courtney discovered a box of Pat's belongings. Inside she found the Cosmic Converter Belt and other relics from Pat's days as Stripesy, sidekick to the original Star-Spangled Kid. She wore the costume to a patriotic-themed school dance to stick it to her stepdad, unaware that the belt grants its wearer super strength and other enhanced physical abilities. When costumed goons crashed the dance, Courtney fought back and was startled (but overjoyed) by her new powers.
Pat quickly recognized the belt and Courtney's determination to wear it. A technical genius himself, he created and donned the robotic armor named S.T.R.I.P.E. to serve as her guardian. Together, as Star-Spangled Kid and S.T.R.I.P.E., they protected their small town of Blue Valley and gained the attention of established heroes like Captain Marvel, Oracle, Young Justice, and Starman.
Eventually, Courtney would also be noticed by the Justice Society of America. The 16-year-old joined the legendary organization as a junior member and remains a landmark member to this day. (Courtney recently returned to the DC Rebirth universe thanks to Doctor Manhattan.) When Starman decided to end his superhero career and focus on his family in Starman #80, he gave his powerful Cosmic Staff to the young hero. She accepted, and Stargirl was born.
Stargirl Cheat Sheet First Appearance: Stars and S.T.R.I.P.E. #0 (1999) (as Star-Spangled Kid) Creators: Geoff Johns and Lee Moder Real Name: Courtney Whitmore Aliases: Star-Spangled Kid, Stargirl, Starwoman Current Team: Justice Society of America/JSA Recommended Reading: Stars and S.T.R.I.P.E., JSA by Geoff Johns Book One, Sins of Youth: Starwoman & The JSA Jr., JSA #81Stargirl's Powers and Abilities Courtney is a gifted athlete trained in gymnastics and martial arts. Her physical abilities are greatly enhanced by the technologically advanced Cosmic Converter Belt worn around her waist. Stargirl also wields the Cosmic Staff, which additionally grants her the power of flight and energy blasts. 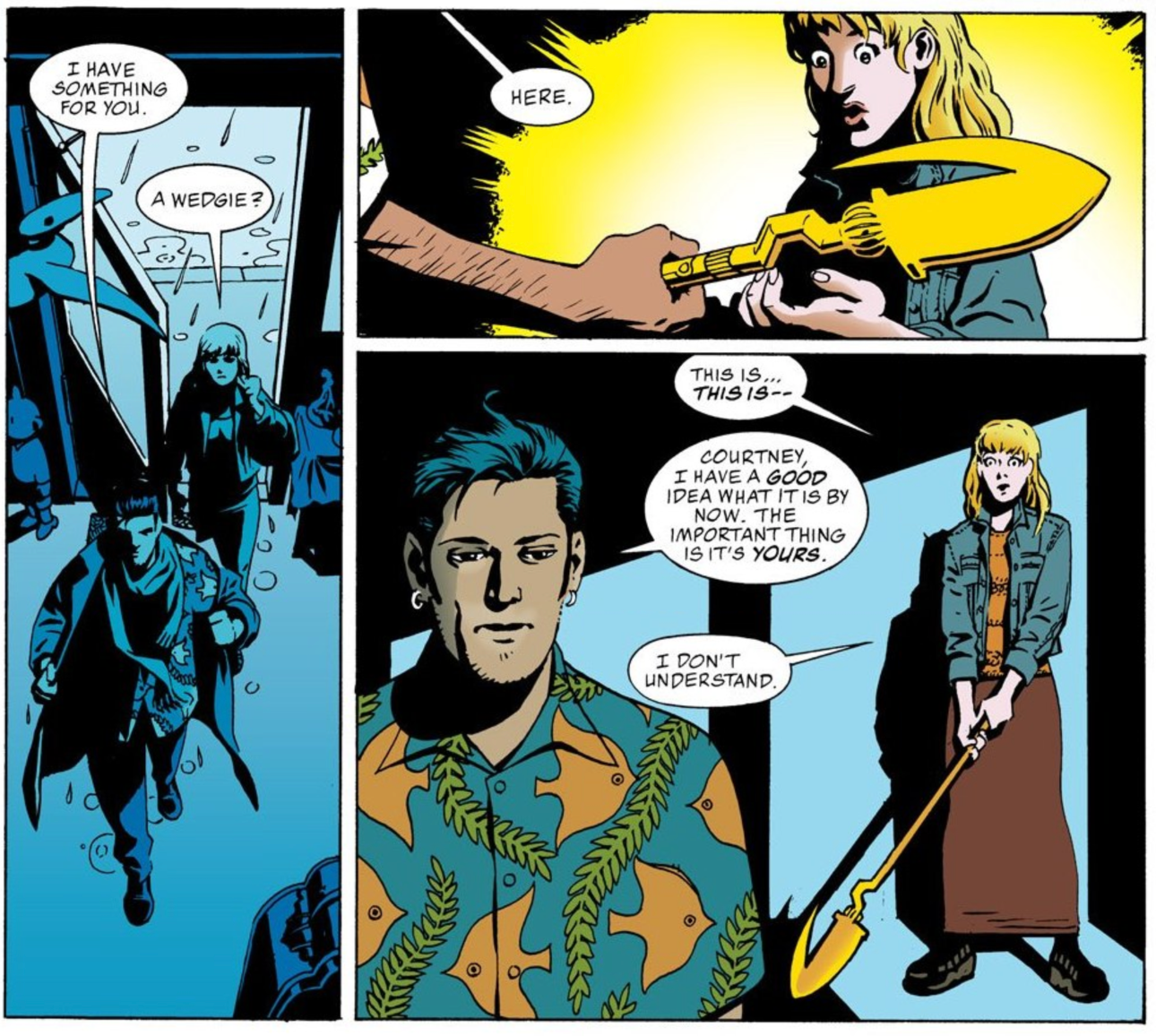 Starman gives Courtney the Cosmic Staff, which grants her the power of flight and energy blasts. Stargirl's Signature Villains During her tenure as a high school hero, Courtney most often squared off against Shiv, the teenage daughter of supervillain Dragon King. She also discovered later that her father was actually a low-level member of the villainous group the Royal Flush Gang, which drove the two apart for good. Stargirl's Most Heroic Moments While Stargirl more than does her part in battles ranging from a showdown with the sorcerer Modru to the Infinite Crisis, she shone brightest in the "Sins of Youth" storyline in 2000. When Klarion the Witch Boy reversed the ages of heroes and their teen sidekicks to drive a wedge between them, the now-adult Courtney Whitmore found herself in charge of tiny members of the JSA. Taking the name Starwoman, she did her best to wrangle the superpowered tots, and showed responsibility and the marks of a true hero. What Network Will Stargirl Be on? Episodes of Stargirl will debut on the DC Universe streaming service before rolling out on The CW the following day. The episodes will also be available on The CW's online platforms.
Stargirl might be coming to The CW, but she's got an Earth all to herself. When audiences were treated to a brief glimpse of Stargirl as the Crisis on Infinite Earths storyline wrapped up, we learned that she is part of Earth-2—and the new Arrowverse inhabits Earth-Prime. Of course, nothing is ruled out in a multiverse of crossovers, but for now she won't have The Flash or Supergirl on speed-dial.
Courtney's super-origins on TV are also slightly different than her comics counterpart. While she still uncovers her stepdad's sidekick stash, it's not merely the Cosmic Belt she finds, but the Cosmic Staff itself.
Stargirl isn't on her own, though. We already know that Luke Wilson is playing Pat Dugan / S.T.R.I.P.E., and Joel McHale appears as Sylvester Pemberton / Starman (in a very spangly outfit). There's also an incredible roster of Golden Age Justice Society of America characters whose live-action appearances seem to be the closest yet to their comics counterparts, like Lou Ferrigno Jr. as Rex Tyler/Hourman, Brian Stapf as Ted Grant/Wildcat, and Henry Thomas as Charles McNider/Doctor Mid-Nite.
Stargirl in TV and Games

Stargirl debuts in the spring of 2020 on DC Universe and The CW.
Kelly Knox is a freelance writer who also contributes to StarWars.com, DCComics.com, Nerdist, and more. Follow her on Twitter at @kelly_knox to talk Star Wars, Dungeons & Dragons, and comics.