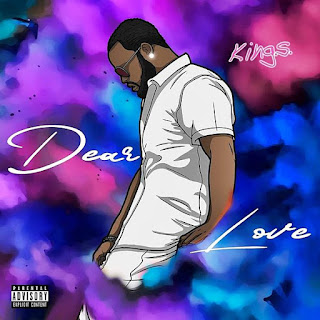 King. S is a 30 year old R&B artist from Pensacola, Florida. Raised around a musical family, King was bound to be groomed into an exceptional superstar. Using music to escape from problems and life issues, he utilizes his talent in a stupendous manner. Today, he graces us with a passionate driven LP entitled "Dear Love".

The overall production performance of this album is quite up to date with sounds of the 808's pounding and nice neo-soul melodies. One of my favorite things of this album is that it can definitely be considered a concept album. The album features up to 8 love inspired songs that bring you into the mindset of a young man that is learning about love as the days go by. The cover is quite vibrant showing a cartoon version of King.S dressed in white seeming as if he was in deep contemplation.

This project is intended to be a letter about the state of relationships and his perspective on topics that men normally don't discuss. This album starts off with clean melody and vocal range on the intro track, "Here I Am". The track is short and sweet but have so much to cover. He talks about how being separate has a deep lesson but sometimes you think about the person who is now distant. The intro brings light on the subjects that is later to be talk about throughout the album.

On the song "What Would You Do", he sings about having relationship problems and trying your best to fight through the issues. It's a statement asking what would be your claim to have a stable state of love. I love the beat and reminds me of Usher's hit record in 1997 named "Nice and Slow". The next track which is one of favorite on this album is entitled "Ouh Oh" which gives detail of a late night rendezvous when two come together and make time for each other even though they know there are difficulties in life that prevent them of joining. With thoughts in ways to make things work, a little enticement draws a person closer to that promise land.

The last but also my most favorite record is the CD entitled song, "Dear Love". The flute instruments really bring out a magical feeling and his performance was definitely the best throughout the album. He makes it vintage with more of a 1960's blues club way of saying his words. The chorus is quite impactful as he sheds light on how throughout his whole relationship all he ever wanted to do was to make the girl happy. However, things seem impossible with the lack of effort from both parties.

If I have to rate this album on a scale of 1 to 10, I will give it a 7 for tremendous harmony, consistency of concept, and well mixed production. If you are a fan of R&B, this album will definitely be a good listen