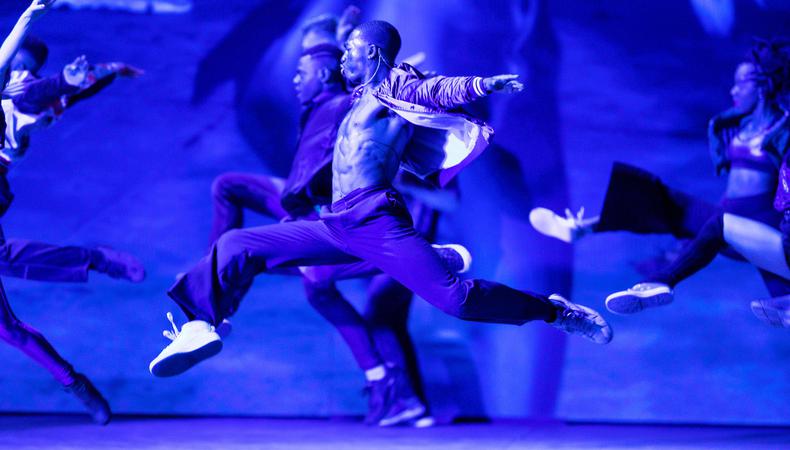 Photo Source: Jan Versweyveld
The country looks very different than it did 60 years ago, and any new production of "West Side Story" probably should, too. That's the philosophy of Anne Teresa De Keersmaeker, the choreographer enlisted by theater's preeminent avant-garde interpreter Ivo van Hove for his revival of the American classic (now running at the Broadway Theatre). De Keersmaeker makes her Broadway debut with this sinister take on the Leonard Bernstein-Arthur Laurents-Stephen Sondheim epic—a feat she acknowledges as going directly "into the lion's mouth."
In your words, what does the choreographer do?A choreographer organizes movement in time and in space. I love choreography because it is the most direct [means] of embodied abstraction. I like to work with the body. I do consider myself even more a dancer than a choreographer. Another possible definition is defying gravity. Also, if you go back to ancient Greek mythology, it means "writing the people." Chore means the chorus, and graphing in Greek means writing, and in the ancient Greek tragedies, the chorus was an objective commenting on what happened to the main characters.

READ: 4 Tips for Booking a Choreography Job
How did you first start choreographing? From the beginning, like a lot of little girls, I wanted to put on a dress and turn. I would turn in front of the mirror, and then very soon after, I knew that I wanted to make my own work—I wanted to find my own movements, my own grammar, my own language. So I decided, by the time I was 16, [that] I wanted to become a choreographer and do my own work.
How was it that you came to work on "West Side Story"? Ivo asked if I would be interested in doing it. I'd wanted to work with Ivo for a very long time and we hadn't found the right project. I had been hesitating a lot. But I think because of the material, the music of Bernstein—I have an enormous admiration for Leonard Bernstein, but also for Sondheim and Arthur Laurents, and of course the work of Jerome Robbins [director and choreographer of the original stage production and co-director of the 1961 film]. The fact that it is also a story based on Shakespeare, it seemed like an ideal combination. I was reluctant to work in such a big structure, but if I was going to do a musical, I might as well do this one. It's not just an American classic, but maybe the American classic. I knew that I was going into the lion's mouth, and that I had the risk of being roasted.
How different has this experience choreographing a huge Broadway musical been from your previous choreography work? Very different, because it's a scale difference. I had to sharpen my pencil, basically. There is a certain codified language, which I had to learn. Also, doing a [play] is different from doing a Broadway musical, where so many people are involved. The largest pieces I've done were with 16, 17 people. Here, every night you have 40, 45 people onstage. That's a huge difference. I've done opera before, but here, the big challenge was how can you make dance, theater, and music fuse together and serve the story? Tell the story, that was the main [objective]. All the movement had to relate to that expression, through a certain emotional logic or through dramatic consequences, which was challenging.
Were you conscious of paying homage to the classic "West Side Story" movement while still creating something new? Proportion-wise, the main thing was to create something new. This was an exceptional occasion, because it was the first time we got permission from the Jerome Robbins estate to write new choreography. The music doesn't change, the text doesn't change. With all the respect and admiration I had for Robbins—without denying that, how do you make a genuinely authentic new reading for the 21st century? The world has changed from 60 years ago, but the stories that are told in Shakespeare are stories of love and death, and tension fields between the community and individuals, about race exclusion, about immigration, about integration, about violence, about friendship. They are timeless, but at the same time you want to give them an articulation and a readability that is genuinely us today in a changed world. And I think the bodies of people are the same but also diff erent; people move in a different way than they did 60 years ago. Also in social dancing, Jerome Robbins was going for Latino dancing; for the mambo, he asked people to assist him to create a real Latino movement. Today, you have hip-hop dancing, house dancing, and that somehow had to be present.

READ: Why All Actors Need Some Dance Training—Yes, Even You
Do you have ways to make actors who aren't "dancers" more comfortable with movement? Yes. We were lucky that we had exceptionally good performers in the role of Tony [Isaac Powell] and Maria [Shereen Pimentel]. They're not really dancers, but they are extremely gifted. It was such an inspiring experience. It was making sure that in certain scenes, to get the story told, we would speak about the choreography: How does it tell the story, and also in the acting scenes, how we should choreograph those purely theatrical scenes. We all had to come out of our comfort zones—and it was not a cozy, comfortable zone [to work in].
What advice would you offer to aspiring choreographers? First of all, train very well as a dancer yourself, so that you know the mechanics. The starting point is your own body in all its different aspects: mechanically, sensuously, socially. And then also, I have learned a lot from composers from different centuries, how they organize movements around time and space. I really consider music to be my first partner, and I know that in modern dance and post-modern dance, there has very often been a tie that exists in the history of mankind: People dance to music.

Ready to get to work? Check out Backstage's dance audition listings!
Casey Mink
Casey Mink is the staff writer at Backstage. When she's not writing about television, film, or theater, she is definitely somewhere watching it.
See full bio and articles here!