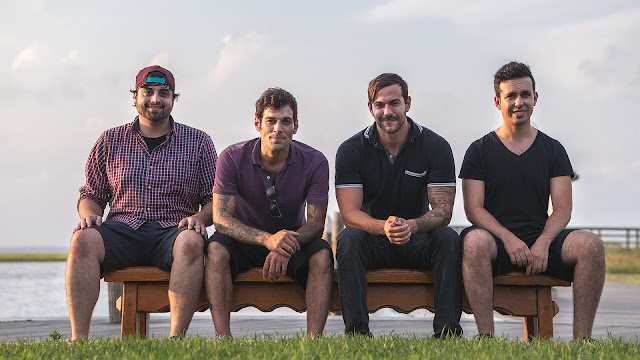 PRSNA is a pop rock band based out of Long Island, New York who is formerly known as Persona. They introduce to the world melodic vocals, synchronizing guitars, and high velocity rhythm. Over the course of 9 years, the group has released 2 EPs and have performed with Third Eye Blind, Twenty-One Pilots, and Envy on the east coast. They are an one of a kind band with a 90's-esque style that high school students would love. Punk Rock is suppose to be fun energetic and free-spirited which PRSNA performs well.

While listening to the single "Cut Throat", I was taken on a journey consisting of a spiraling down relationship between a hard working person and political jerks forcing their way of living on the average joe. Sometimes people can feel alienated and blocked from the success they want to achieve; this also can be a metaphor of a battle between the conscious and subconscious mind. In life, we could be our own enemies and become aware but seem to make the same mistakes over and over again.

The vocoder driven love song, "Never Said Goodbye" is my favorite song from this band. I really enjoyed the mixing and the different synth effects in the background. The different breakdowns of the instrumentation really brings out the emotional stride of this record. Of course if somebody leave stones unturned, it can really be heartbreaking. Missing pieces to the puzzle can drive people stir crazy. This is a very relatable subject because even I have been in relationships that ended abruptly with no trace to the disturbance. The mysteries of life has always been thought provoking for me. I am just happy that PRSNA has been the voice to represent such an impactful subject.

The album entitled single "Lions", reminds me of this one YouTube video I have watched about the dark night of the soul. Living with hope praying that someone can understand you and being there for you in your darkest hour is a common thought for someone dealing with emotional pain. Although I feel that the mixing could be a little better on this one, the song did contain a very powerful message and it displays the versatile delivery that PRSNA is capable of.

If I have to rate these songs on a scale of 1 to 10, I will give it a 7 for energy consistency of concept conveying a message and great composition.