DC: 5 Marvel Villains Wonder Woman Would Get Along With (& 5 She Would Hate) 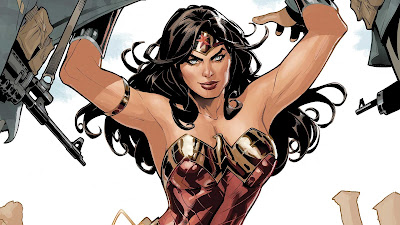 Wonder Woman is one of the shining stars of the DC Universe, as much a beacon of hope, goodness, and virtue to the world as Superman. However, Wonder Woman's sensibilities sometimes stray towards a more stark and brutal worldview, due to her upbringing by a warrior society.
RELATED: Wonder Woman: 5 Best Versions of the DC Hero (& The 5 Worst)
Diana lives her life by a warrior's code and has sometimes teamed up with those considered "villains" but follow a similar code as well. How would she fare with the villains of the Marvel Universe, however? Here are 5 Marvel Villains Wonder Woman Would Get Along With (& 5 She Would Hate).
10 GET ALONG: MAGNETO
Diana's mission in the world outside of Paradise Island is that of an ambassador, trying to impart the Amazon credo of bringing peace and love into the world, but also safeguarding her island from outside incursions. This desire to protect her people has sometimes trumped the other half of her mission, leading to some spectacular battles between the Amazons and potential invaders.
RELATED: X-Men: 10 Things Fans Forget About Magneto
To this end, she would find a kinship with Magneto, who strives to safeguard the lives of his fellow mutants. Granted, he may be a tad over-proactive and zealous at times in seeking to eradicate or
subjugate humanity, but there's no doubt Diana would understand the desire to protect one's people.

SHOP FOR THIS WONDER WOMEN POSTER

9 HATE: THE ENCHANTRESS
One of Wonder Woman's classic foes is Circe, a powerful sorceress who wishes to eliminate Diana as an obstacle for gaining more power. Circe's counterpart in the Marvel Universe is The Enchantress, a powerful Asgardian sorceress who often uses a combination of magic and seduction to achieve her goals of self-aggrandizement.
Similarities to Circe aside, Diana is not a big fan of using seduction as a means to an end. A warrior at heart, Diana often advocates a direct and honorable face-to-face combat or negotiation to settle issues. She would no doubt find The Enchantress' aims and methods severely distasteful.

8 GET ALONG: TASKMASTER
Wonder Woman is a skilled and talented warrior, and to remain that way, she is always looking for new methods to train in and partners to spar with. Following up Superman and Batman would be a tough act for anyone to follow, but it should be easy for the Taskmaster, a mercenary who can mimic the moves of any fighter he sees.
RELATED: Black Widow: 5 DC Heroes That Taskmaster Can Beat (& 5 He Can't)
Diana would definitely not approve of the Taskmaster's choice of vocation, but she'd revel in the opportunity to test her mettle against such a skilled opponent. Although he's not super-powered, Taskmaster definitely knows enough martial techniques to keep Wonder Woman occupied and learning indefinitely.

7 HATE: THE RED SKULL
A bulk of Wonder Woman's earliest appearances pitted her against the Nazis, as her first appearance was made during World War II. Aside from depicting American superheroes fighting real-life American enemies at the time, the Nazi's ideology of world domination based on racial purity was anathema to Diana's mission of peace, love, and acceptance amongst the people of the world.
For this reason, Diana would hate the Red Skull, and do everything she could to destroy his multiple organizations and plans for world domination. Bringing the Skull to justice would be a self-realized crowning achievement for Diana.

6 GET ALONG: SUPER-SKRULL
Diana's warrior spirit is a cornerstone of her being, forming a big part of her personality and based on her strong belief in her mission and the safeguarding of her people. In this way, she shares much common ground with the Super-Skrull, who prides himself on being the greatest warrior and advocated for the Skrull race.
RELATED: 10 Things Every Marvel Fan Should Know About The Super Skrull
An encounter between these two formidable combatants will almost certainly result in a battle. Probably resulting in a stalemate, the two opponents would definitely emerge from that battle with, at worst, a begrudging respect for each other, or at best, a friendship.

5 HATE: PURPLE MAN
Diana was raised by strong, independent women to follow suit, so if there's one thing Diana takes issue with its someone who tries to rob someone else of their autonomy and freedom.
This is why she would have an issue with the Purple Man, who has the ability to control people's minds and force them to do whatever he wishes. Perhaps most famously, he used his ability to manipulate Jessica Jones into becoming his virtual slave. Wonder Woman has dealt harshly with mind-control experts before, and a similar fate could await one who preys on her "sisters."

4 GET ALONG: MYSTIQUE
Mystique has fulfilled almost as many roles in her life as she has assumed different identities, as she's been a criminal, government agent, assassin and X-Man. But above all, she's a survivor, weathering hardships as best she can, doing whatever it takes to get through them and thrive.
RELATED: X-Men: 10 DC Heroes We'd Love To See Mystique Impersonate
In this manner, Mystique would prove herself adapting the warrior's code of the Amazons to her own life, and would win Diana's respect. Perseverance and steadfastness in the face of adversity is the Amazon way, and there's little doubt Diana wouldn't recognize and admire those qualities in Raven Darkholme.

3 HATE: BULLSEYE
Wonder Woman may have a warrior's spirit, but if there's one thing she cannot abide, its sadism and a love of violence for violence's sake. For this reason, she'd definitely hate the master assassin, Bullseye. Responsible for some of the most heinous acts perpetrated against Daredevil in poor Matt Murdock's life, Bullseye definitely takes a little too much joy in spreading violence and misery to others. Encountering him would probably lead Diana to stop his murderous spree decisively, with a fair share of disgust.

2 GET ALONG: DOCTOR DOOM
Historically, Diana doesn't do well with power-hunger megalomaniacs intent on ruling the universe, and has suffered defeat at the hands of Doctor Doom before. However, Doom has been known to aid heroes when they have a common cause, and can be a worthy ally when circumstances dictate.
RELATED: 10 Things Fans Forget About Doctor Doom
A fellow monarch responsible for his people, Doom has many resources, from science to sorcery, he can use to defend himself and his kingdom, much as the Amazons do. Lastly, Doom has an internal (albeit somewhat skewed) sense of honor dictating his actions that Diana could come to respect.

1 HATE: NORMAN OSBORN
Aside from spreading peace and harmony throughout nations, Wonder Woman's mission also entails teaching the rest of humanity how to leave in balance with Gaia, the Earth Mother, as she and her fellow Amazonians do.
This would put her at odds with Norman Osborn, a wealthy industrialist who sees everything in front of him, from Earth's resources to the people of the earth themselves, as fodder for his own ambition. Sacrificing such precious elements for greedy ambition and personal advancement would incense Diana, setting up an Osborn/Wonder Woman battle for sure.