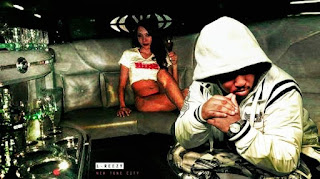 TODAY WE GOT THE CHANCE TO CATCH UP WITH THE 2 TIME OHIO ENTERTAINMENT NOMINEE REEZY.

READ WHAT THE HIP HOP PHENOM HAD TO SAY!

Q: Reezy, what was Cleveland like growing up as a kid? Did you go through the typical struggles of living in a large city?

A: In Cleveland Ohio, i lived in the Harvard & Lee neighborhood; A community where kids could play and people could socialize. Pretty much I was raised by my grandparents in a middle class enviornment. I never had to worry about starving, poverty or being poor. My grandparents made it possible for me to live a normal life.

Q: How would you describe your music?

A: I would describe my music being a mixture of Old School Hip-Hop with a twist of modern day. I love to make music people can vibe and have fun listening to.

Q: Where do you believe you received your inspiration from?

A: my inspiration came from watching the classic 1985 hip-hop film Krush Groove. After being inspired by the talents of Run DMC, Kurtis Blow and the Fat Boys. That's when i immediately picked up a mic and started rapping. Even though my first love was Drawing

Q: What was your reaction to artists like Bone Thugs N Harmony and Kid Cudi?

Q: Was music and poetry in your bloodline?

A: Absolutely! My mother was a poet herself. She would keep diaries of poems and all kinds of short stories. My father plays the bass guitar. He was once played in a band consisting of friends he grew up with.

Q: When you first started working with Deangelo Chatman, Did you think you would be doing this as a profession?

A: When me and Deangelo..who we know him best as Dray started working together, we knew it was going to be the start of something great. Our passions for music are so strong, the chemistry was already there.

Q: Whose idea was it to start the Certified Goon Squad?  How did that experience shape your creativity and art?

A: When i met Noble Willis my freshman year at John F. Kennedy High School, we started out as a group called Street Souljaz. There was a misunderstanding among the other kids. They thought we were a street gang. This led to a decision to change the name. Noble wanted to call the group Certified Goon Clique. I thought the name was Cliche. I convinced we should call it Certified Goon Squad. At the time, the word Goon was very popular, so we put our own twist to it. Greatness Overcomes Our Nature. Meaning. Be greater than your environment.

Q: Are some of the Certified Goon Squad mixtapes available online?  Are you guys still working together?

A: Yes! You can find our mixtapes Gone Out this World, The Game's Most Wanted parts 1 & 2 available now on Datpiff.com all produced, mixed and mastered by Young Dray on the Track. My mixtapes Fresh Outta Cleveland & Loyalty & Dedication is also available.

Q: How did MADD Music Recording Group Hear about You?  Would you say being signed has Pros and Cons? Can you Explain?

A: Other than Young Dray on the Track, there's another producer I've worked with who goes by the name of Madd Mann, who I've been knowing for about 10 or 11 years. I knew him as being a drummer at my church Greater Bethel A.M.E Church. When i spoke with him for the first time, he told me about his studio so i decided to check him out. As time passed, i learned he's produced on many billboard hit songs. In 2018, after our single Da Comeback & Paradise featuring Stone The Butcha (produced by Eric Wilson)gained popularity, Madd Mann immediately signed us to a production agreement. After the project was complete, Noble (Rioo Denero) decided to pursue a solo career of his own, which we agreed on. After i released, Betcha Know Now, Madd Mann signed me to his label Madd Music Recording Group. Let's just say, being signed comes with many responsibilities. I like to think of it as working a full time job with many expectations.

Q: Besides music are there any other interest you have?

A: Besides Music, i love Art & fashion. I'm debating on becoming a brand ambassador for either Fila or Nike one day

Q: How has the pandemic influenced your career?

A: The pandemic helped me get more creative with my music. I manage to get through these tough times by pouring my thoughts and pain in my songs. Remember, this is a storm we're going through. The sunshine is yet to come out sooner than we shall expect.

A: Yes. Always keep God first and never give up on your dreams. If you can see it. If you believe it. You can achieve. No dream is too small or too big. Anything is possible.

Born Robin Reginald Jordan Lewis on June 8 1994 and raised in Cleveland Ohio. He found a passion for music at an early age while attending Adlai Stevenson Elementary School. At the age of 5, painting and drawing was his first love. By the age of 12, Robin started writing poetry. He would later turn his poetry into songs. All of the other children and teachers would be intrigued by his ability to write. He would battle other students to practice his craft. His rapping ability caught the attention of childhood friend Deangelo Chatman, known as Young Dray on the Track. Together the two would record countless songs and volunteer to perform chores in the neighborhood to raise money in order to buy recording equipment. By the age of 15 when Robin Started high school, he befriended fellow rapper Noble Willis, who went by Young Noble at the time, but later changed his name to Nizzy. Altogether, The three became Certified Goon Squad. The group released countless mixtapes and has performed all over the city of Cleveland. REEZY, Nizzy and Young Dray also have pursued solo careers while being in the group.

Apon pursuing a solo career, REEZY releases his second single, Betcha Know Now featuring Malik X; following up from his first solo single "Paradise" featuring Stone the butcha. Betcha Know Now was released on all platforms June 16 2020 and was very successful; thus landed REEZY a recording deal with Madd Music Recording Group based in Cleveland Ohio, owned by record producer Jeff "Madd Mann" Melton. The company is now tied in with Global Exec Records, who just signed a deal with Sony Music. REEZY is currently working on his first project, Above & Beyond. An official release date has yet to be confirmed.