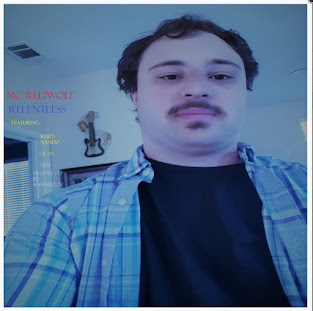 We had a chance to catch up with MC Rewolf!  Read the exclusive interview below!

MC Redwolf, how was your experience in Concord, California as a kid?

Okay.  So to be honest, I had a pretty rough childhood.  Even though at that time  I lived in a middle-classed, suburban  neighborhood,  my life wasn't the kind of middle-classed life that's so commonly glamorized in T.V shows and housing brochures.   Anyways, here I was, this intelligent, fascinating kid who had endless potential.  And yet still, just like anyone else, I got bullied and harassed for basically no reason.  On top of that  my parents had a rough marriage that put a lot of stress and pain  on me growing up.  I will say I tried making the best out of it.   I definitely made  some good friends and did some cool stuff.  Cause after all, I believe you have to make the best you can out of what you have.
What inspired you to speak on mental health issues in your lyrics?
So coping with them have played a big part in my life.   I mean, most people don't like to even talk about  that topic; let alone put it in their lyrics.  Though personally,  I feel like because it's kind of a taboo, it's been my duty to innovate by elevating it front and center so that other artists who struggle with issues like that be inclined to speak more about it.
Would you say that west coast hip hop deserves more attention? What are some of the changes you would make as a influencer?
A few years ago , we had YG, SOB x RBE, Mozzy, and  Nipsey Hussle (rest in peace) doing the left coast justice.  Since then, though, Nipsey's passed away, SOB and RBE plus Shoreline Mafia disbanded , Mozzy had too many beefs and YG's relevancy has declined.   So right now I definitely think west coast hip hop is starting to decline.  Now, in terms of mainstream attention I definitely think this new generation, my generation of west coast artists deserve more exposure for sure.  As a west-coast artist my main purpose is to shake up the rap scene around here.  Gangster rap has been a big part of our local scene for a long time.  Although I even enjoy and bump gangsta rap, I  feel like there needs to be more variety in our lyrics and more opportunities for artists like me who don't live that fast life.
What is reaction of the fans when you blend a sing songey style with a west coast beat?
I feel like most of my fans enjoy my style because it's so unique.  Most artist now either rap traditionally like in the older days of hip-hop,  they just plain out  sing their lyrics.  On a side-note there's still mumble rap but that's its own genre I personally believe.  Anyways,  I feel like people enjoy how I bridge the gap between old and new styles of rapping.   And I think  it just fits the funky, up-tempo beats I normally use nicely.  That's not to say I haven't experimented with other styles of beats; I've rapped on trap and boombap beats before too.  On my  recent song Blow A Lil Harder I even used a Texas-style beat.
Who are some of the notable influences that inspired your music today?
When it comes to influences, 2pac's lyrical versatility and charisma still influences my music to this day.  I also can thank a lot of underground SF Bay area rappers like Woodie, Mac Dre and  Coughnut for inspiring my DIY techniques and philosophy.   Like a lot of other west coast artists I also look up to a lot of funk artists like Roger Troutman and George Clinton.  Lastly,  I guess you could say listening to old blues records inspired me to rap about subjects that many artists wouldn't rap about.
So explain your creative process when you sit down and make a record?
So, I start the process by listening to the beat I'm using.  I then try to  figure out the mood of the instrumental? is it sad? Happy? Angry? Uplifting? Then based off that I then try to figure out what I want to rap about.  Once I've decided the topic I write my verses.  Most of my songs have 2 or 3 verses with a hook and maybe an intro or bridge.  Sometimes I like to DM other artists to see if they'll feature.  Then, I make a demo, find an audio  engineer, and publish it once the final product is mixed and mastered.
How has coronavirus affected your music career lately?
Yes, but in a positive way. Since this pandemic started I've had more free time to focus a lot more on my career.  On top of that, the quality of my tracks has improved greatly.
any last remarks?
I have a couple people to thank for frequently collaborating and helping my career.  Shoutout to my girl and significant other , S-Ram for always being down to sing those choruses on my tracks. Not only have we had a great , wonderful relationship but we've also helped our careers grow together.  Another shoutout to my partner Hex. Not only have you been a great friend.  You've also added flavor with your short appearances.
CHECK OUT SOME HIS TUNES BELOW
https://youtu.be/C1cRKNC-kJE