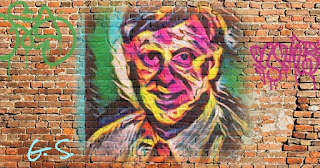 Glenn Shayne, how long have you been working on music and what inspired you to start?
I've been almost all of my life. I started writing poems in gradeschool free verse. In high school I would play around with words for lyrics.
where you from and How was it like coming up as a kid?
I Grew up in Milwaukee, Wisconsin. Just a normal childhood. Played sports, my best sport was bowling. Liked going to sporting events. Saw epic battles in NBA games with the Milwaukee Bucks. When they had Kareem Adul-Jabbar. Memorable baseball games with the Milwaukee Brewers. Packer and Wisconsin Badger games.
So Glenn, tell us about the Glenn's Quarterdeck Lounge; Where did this idea come from?
Its was a landmark called Skip's Quarterdeck Lounge. In Treasure Island, Florida. The Club became availabe, from the owner who bought it from Skip.

By bringing in road bands from around the Country. Glenn's Quarterdeck Lounge, became the premier Nite Club in the Tampa Bay Area for three years. From 1983-1986 we rocked 7 nights a week. Everyone knew where to go for live entertainment. We had TV commericals, print ads, radio commericals and special events.
We had famous people stop by. Hulk Hogan who was the WWF champion at the time, now the WWE. Jerry Goldsmith who was on vacation, who made most of the movie sound tracks stopped in. Members of YES, came in after there concert.
It was cool, you never knew who would stop in at any time. We also had bands that were touring stop in after their shows.
Name some notable people you have collaborated with and what was the experience like?
Briana Tyson, we collaborated on Catch My Tears. Awesome experience working with someone in the music business.
I'm currently Working with Tunedly, I get to work with amazing professional musicians. too many to name.
I've also hired some vocalists from Fiverr. Christina who sings Your Love Bleeds In Me. Along with AJ Lewis who sings in To Be Your Man. I've been adding contant to my spotify and Pandora. Where I have Glenn Shayne Radio.
What has been your favorite moment of being in the music industry so far?
Seeing how a song comes to life. Starting with the lyric to the composing. Using real instruments, we don't cut corners in my songs.
So tell us about your music, what projects are you currently working on?
I'm writing lyrics all the time. Just finished Fallin', getting ready to finish I'm Nobody's Eye Candy. A country rock song for a female vocalist. I'm hoping to do songs on a regular basis. Where we can release about 4 songs a yeas as singles. I would love to get my songs into movies, tv and commericals. Just don't have a good avenue or connections for that.
I'm Going to put all of my new songs together and release an album also. To support the singles. Sometime in 2021 to release the album.  I hope it showcases all of the collaborators that I'm working with.
Tell us about the track, "Why are You Forbidden"
Well  its about a forbidden love. You know you want something, but the other person has other ideas. The lyrics really tell the story.  The track is featuring Dusty Hughes.
Are there any last remarks?
Can't wait. to make more songs. I am creating a market for the songs. I'd love to have a major artist pick up any of my songs. My fan base is growing all of the time.