GG Maximum shares insight on her Music and More! 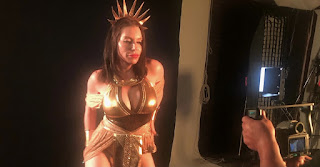 GG, give us some details about your hometown of Bedford, TX? what was it like growing up in such a town?

My hometown was very plain. There were a lot of kids my age running around back then. I spent a lot of time outdoors, but when I became a teenager, I locked myself in my room learning classical music for competitions that I won and advanced in.That included my high school talent show my senior year singing a song from Victor Victoria. As an only child, I had freedom to think a lot. When I was invited to play with the others, we had a lot of overgrown land to play in. That rapidlybecame a neighboring brick city. All the horse trails and creeks were gone or made into fancy canals. My hometown is landlocked. I live here again in the same house I grew up in. I do care about my city. Years ago, I ran for city council, losing butbeing appointed as a public city official for about three years.

So tell us about your latest song "Mayans"
I am coming out with new material but wanted to get the ball rolling and distributed, as a solo song, “Mayans”. It has a B52’S feel. I think the follow up songs will be even better. Specific to “Mayans”, I chose to write a song that was about something completely random and that no one in a million would think to write a song to. I am the type that strange, yet benign, ideas pop into my head and I act on them. I was thinking about when COVID-19 hit and as a healthcare worker myself, believed that this was mother nature’s way of cleansing the planet. Now there is vaccination hope but the hot masks that are too tight and face shields you can barely see through have been a transformation that is horrible for us.
What is it like to have Lady Gaga as your influence?

As far a real influence, I give credit to Queen, Led Zeppelin, Rush, The Darkness, Tool, Electric Light Orchestra, and anything heavy that has an orchestrated sound because I am classically trained, I suppose. Lady Ga Ga is not an influence. She is a kindred spirit of my performances of younger days. I was ahead of the times. She caught the wave. I do not follow her or buy her music. Everything I know about her has been brought to my attention by others. When I did finally hear her music, I was impressed that so many people were correct in comparing the two of us. My friends and family joke that I am Lady Ga Gabefore she even existed. The musical chances we both take resemble each other. I am fond of eccentricity, having no boundaries in my own head and the courage as a performer turned studio musician am elated for being called unusual.

So what's a typical day of creation for GG Maximum?

I play by ear. Vocally, I am classically trained. A typical day for my creative writing starts with finished song that magically pops into my head unannounced. If I think it is entertaining, within this madness I identify a bass line for a real foundation. I cannot catch all these tunes because my brain makes things up when it wants to. I often loose the data.  Sometimes the chord progressions and scales go haywire, so I filter simplicity by banging out the bass root. Unfortunately, a lot gets lost, but the intervals and rhythms are still there lingering. If need be, I can write at will. It is about half and half on my inspirations. I will sometimes record it humming on my phone and then forgetabout it. I have a large library of potential songs that could be killer if I went back. In fact, I should do that. If at home, when I hear a tune, I grab my bass frantically. Once I hit the bass, I tweak it and compliment it with the chorus and bridge. I practice it and record the bass as a solo so beats will not interfere with what I want it to sound like. Then I scat a vocal line. I have a jazz background and love to scat. I choose, for my vocals, apurposeful change to the entire feel of the song by finding a counterpart with no genre limitations. After that, at the computer, I write the stanzas going into freestyle mode with no melody, creating a rhythm. The lyrics are written mindlessly, not even looking to see if they make sense. When I read it, it makes sense. Once the vocal line is done it turns in to an actual song. I use the original key I thought of and program the best beat in that matching key. So, I program the beat and count out the changes, record bass first, vocals, my heavily stacked harmonies and then throw in some keys. I have learned not to put anything out for opinion unless it is finished. I have done that because I have no patience.

What would be the feeling if you won the Grammy?

If I won a Grammy,  I think it is about getting the right exposure one bite a time. I would network and never be a one hit wonder. I am here to stay. I would move on to write for other artists behind the scenes.

COVID-19 has put so many musicians out of work and with the pro’s, a backup plan just is not there. Do not forget the DJ’s too. For me, I am a recluse with my own means of recording and then, I have a tight nucleus of people on final recordings, mixing, mastering and video. We socially distance and wear masks unless shooting or singing where I am far away or in a sound booth anyway.

If its anything else you can do in life, what would it be?

Other must do’s in my life include working out and healthcare. I gave up on trying to make it as a live band when I was offered a legit gig. I made a lot of money as a professional party/wedding singer in a top Texas band, but I needed to get out of that lifestyle. As far as other work I engage in, I am a grateful respiratory therapist. It is a meaningful occupation and I cherish meaning. With my original music, I do not generate revenue. It is not because it is not worthy. It is because I am a needle in a haystack. Getting money from sales is hopeful with interviews and publicity such as this. Even if I could support myself with music, I would want to continue to practice healthcare and hit the gym because time away from music is really what makes music.

Thank you if you made it through all of this!